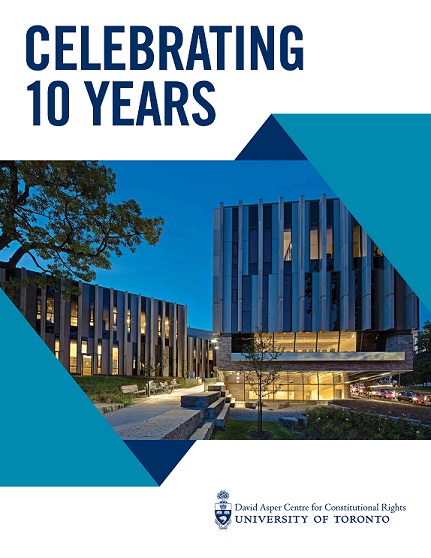 It’s been a full decade since the Asper Centre for Constitutional Rights opened its doors!

To celebrate 10 years of dedicated advocacy, education and research, former Supreme Court of Canada Justice Thomas Cromwell will moderate a conversation between Mary Eberts and Joseph Arvay, two of our former Constitutional Litigators-in-Residence

The Honourable Thomas Albert Cromwell, C.C. received law degrees from Queen’s and Oxford, practised law in Kingston and Toronto and taught law at Dalhousie University. During his time at Dalhousie, he was active as a labour arbitrator and served as Vice-chair of the Nova Scotia Labour Relations Board. After serving as Executive Legal Officer to the Chief Justice Canada from 1992 – 1995, he was appointed a judge of the Nova Scotia Court of Appeal in 1997, serving there until his appointment as a judge of the Supreme Court of Canada in 2008. Mr. Cromwell was the first recipient of the Canadian Bar Association’s Louis St. Laurent Award of Excellence and is an honorary fellow of Exeter College, Oxford and of the American College of Trial Lawyers. A holder of four honorary doctorates in law, he has also had an award established in his name at the Queen’s Faculty of Law, The Honourable Thomas Cromwell Award for Public Service. He is the chair of the Action Committee on Access to Justice in Civil and Family Matters, a director of the International Centre for Criminal Law Reform and Criminal Justice and of Access Pro Bono British Columbia. He retired from the Supreme Court of Canada on September 1st, 2016. A member of the Bars of Nova Scotia, Ontario and British Columbia, he now serves as senior counsel with Borden Ladner Gervais LLP in Ottawa and Vancouver. He is a recipient of the Canadian Institute for the Administration of Justice’s Justice Medal and of the Medal of the International Society for the Reform of Criminal Law. In 2017, was named a Companion of the Order of Canada for his “illustrious service as a Supreme Court justice, and for his leadership in improving access to justice for all Canadians.” In 2018, he was named by the Canadian Lawyer Magazine as of one Canada’s most influential lawyers.

Mary Eberts received her legal education at Western and the Harvard Law School, and is a member of the Bar of Ontario. She joined a Bay St. law firm after several years of teaching at the Faculty of Law, University of Toronto, and was a partner at that firm until opening a small firm specializing in Charter and public law litigation. From this base in Toronto, she has appeared as counsel to parties and interveners in the Supreme Court of Canada, Courts of Appeal and Superior Courts in Ontario and other provinces, the Federal Court and Court of Appeal, and before administrative tribunals and inquests in Ontario and other provinces. She was active in securing the present language of section 15 of the Charter, and was one of the founders of the Women’s Legal Education and Action Fund (LEAF). Since 1991, she has been litigation counsel to the Native Women’s Association of Canada (NWAC). Mary held the Gordon Henderson Chair in Human Rights at the University of Ottawa in 2004-2005 and the Ariel Sallows Chair in Human Rights at the College of Law, University of Saskachewan in 2011 and 2012, where she taught courses in test case litigation. Mary was the Constitutional Litigator in Residence in 2014-15 and a McMurty Fellow at Osgoode Hall Law School in 2015-16. Recognition of her work includes the Law Society Medal, the Governor-General’s Award in Honour of the Persons’ Case, the Queen’s Diamond Jubilee Medal and several honourary degrees. In 2017, Mary was made an Officer of the Order of Canada. She is currently a Senior Fellow at Massey College, University of Toronto.

Joseph Arvay, who co-founded the firm of Arvay Finlay Barristers in 1990 with offices in Vancouver and Victoria, is recognized as one of this country’s most highly respected lawyers. His practice emphasizes constitutional and administrative law matters, as well as Indigenous rights litigation.. He has been counsel in scores of important Supreme Court of Canada cases. His exceptional commitment to human rights in this country has been recognized with numerous awards and tributes. He was awarded honourary doctorates of law from both York University and the University of Victoria. In 2017 he was named an Officer of the Order of Canada as well as a Member of the Order of British Columbia.