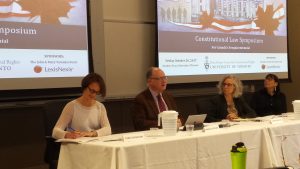 By: Chris Puskas and Nic Martin

Professor Stewart opened the morning’s discussions with comments on the landmark 2015 Supreme Court decision of Carter v Canada and new and ongoing related litigation brought by Julia Lamb and the British Columbia Civil Liberties Association. Carter, applying section 7, reined in the criminal prohibitions against assisted death, which prohibited those suffering from grievous and irremediable medical conditions from seeking physician-assisted death. The Lamb v Canada case challenges aspects of Parliament’s response to Carter in Bill C-14. Bill C-14 – equipped with a robust preamble highlighting the importance of human dignity and autonomy, the equal value of every life, and the need to safeguard from abuses against vulnerable persons – permits patients to seek physician assisted death only when their death is “reasonably foreseeable.” Professor Stewart briefly hypothesized that this aspect of the new provision might be overbroad.

The focus of his discussion, however, was on a recently released pre-trial decision in the Lamb case. Ms. Lamb asked the court to order that certain factual findings from the Carter case were binding on the Attorney General. The court refused to make such an order, meaning that Ms. Lamb and the BCCLA will be tasked with building their own complete factual record. The court’s decision was based on the premise that the Carter judgment was inextricably linked to the legislative and social facts before the Carter court and that Ms. Lamb could not be permitted to rely on those facts in her case challenging different legislation in a different context. This decision raises interesting questions for constitutional litigation and challenges. The more a constitutional decision is tied to its specific facts, the less general force it has. This case leaves us with questions about whether or not the current format of constitutional litigation is best suited to the goal of effective Charter driven law reform.

Next, Professor Jackman took the room for a critical analysis of the case of Gosselin v Quebec. Following Irwin Toy v Quebec, “corporate-commercial economic rights” were excluded from the Charter. However, Chief Justice Dickson left open the possibility that “economic rights fundamental to the human life or survival” may nevertheless fall within the ambit of section 7. Professor Jackman explained that the legal impact of Gosselin has been to render such a reading of section 7 rights a fleeting aspiration at best. In 2002, the Supreme Court rejected Ms. Gosselin’s argument that her section 7 rights were violated due to a Quebec poverty scheme which forced her to live on $170 a month. Professor Jackman explained that, despite the voluminous evidence of the harm Ms. Gosselin faced due to her poverty, including a 5000 page record, the Supreme Court held that the evidence was insufficient to support her claim.

Providing insights into her upcoming paper, Professor Jackman repeatedly returned to the phrase, “one step forward and two steps back” to explain the legacy of this case. On the positive side, eight justices acknowledged that, while section 7 was primarily a negative rights guarantee, it could be interpreted to support positive rights given the right facts. On the negative side, Professor Jackman first argued that the way the court approached the evidence in this case places a disproportionate burden on the claimants as opposed to governments. Second, the case exhibited numerous stereotypes about poverty and those living in poverty. Rather than directly addressing the voluminous record, backed by professional organizations, about the harms of living in poverty, the Court relied on various stereotypes about those living in poverty, such as their weak work ethic and the idea that poverty is a choice.

In conclusion, Professor Jackman reiterated that the case was disheartening, on an intellectual and emotional level, and that the legacy of the case is a Charter out of touch with Canada’s international human rights obligations. Professor Jackman’s paper will explore ways to change this situation so that everyone can truly be accorded equal benefit and protection under the Charter.

The final presentation in the panel was delivered by Professor Macklin. Professor Macklin focused on Canada (Minister of Employment and Immigration) v Chiarelli, a leading immigration law case. Chiarelli held that deportation of permanent residents who have violated a condition of their residency in Canada does not violate section 7 of the Charter. Professor Macklin focused on the Court’s reasoning, which subordinated section 7 of the Charter to the common law principle of the Crown prerogative. Professor Macklin carefully guided the room through the logic in the jurisprudence which was relied on to come to the conclusion in Chiarelli: (1) every state has a right to exclude and expel under international law; (2) there is a common law right of states to exclude and expel and no alien (a non-citizen of the state) has a right to enter or remain in the country; (3) therefore, there is no breach of fundamental justice when excluding or expelling aliens; and (4) consequently, deportations do not breach life, liberty or security of the person under s.7.

Professor Macklin asked the question: how do we connect the first proposition to the third? The lack of a right to remain does not mean that deportation fails to engage life, liberty or security of the person. To drive this point home, Professor Macklin offered various analogies where section 7 is engaged despite having no absolute, unqualified related right: for example, the right to counsel is not an unlimited right, yet we still guarantee state funded legal counsel to those accused of criminal offences. Professor Macklin’s paper, titled “The Inside-Out Constitution,” focuses on exploring this jurisprudential logic and question its doctrinal coherence and normative basis.

All three panelists were met with interesting and engaging questions from the Symposium attendees. The session illustrated that the right to life, liberty and security of the person is a complex and challenging – yet immensely important – section of the Charter. Section 7 will continue to challenge courts and academics alike. If developed consistently, logically, and in line with the Charter’s true vision, it holds great promise for everyone in Canada.

Chris Puskas and Nic Martin are both 2L JD Candidates at the University of Toronto, Faculty of Law and are two of the leaders of this year’s Asper Centre Refugee & Immigration Law student working group.