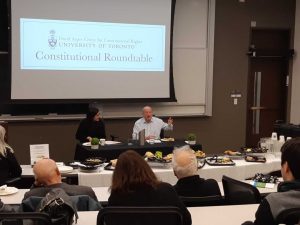 The Asper Centre’s first Constitutional Roundtable of the year transported the room two years ahead into a hypothetical future where the Democrats have won the U.S. 2020 election. In a world where the Democrats control Congress and the White House, how would they navigate a Supreme Court standing in ideological opposition to them?

This is the question explored in a draft chapter of Professor Mark Tushnet’s upcoming book, written for a general audience, which was the focus of this Roundtable presentation. Distinguished visiting Professor Tushnet also gave this year’s Wright lecture at the University of Toronto Faculty of Law and is the William Nelson Cromwell Professor of Law at Harvard Law School. He is a leading scholar of U.S. constitutional law and legal history. Professor Tushnet was joined by Professor Yasmin Dawood as a discussant. Professor Dawood is the Canada Research Chair in Democracy, Constitutionalism, and Electoral Law, and an Associate Professor at the University of Toronto Faculty of Law.

Professor Tushnet’s book posits that 2020 will be a turning point in the American political and constitutional landscape, one that could take either a “Trumpist” path or one more strongly socially democratic than recent Democratic leaders have taken. He discussed the obstacle the US Supreme Court (USSC) will pose to the Democrats if they do manage to win and try to implement socially democratic policies and programs. In particular, Professor Tushnet focused on court-packing as a potential response to this inevitable resistance from the judiciary that the Democrats should seriously consider.

Court-packing refers to increasing the size of the bench, a practice that is not technically unconstitutional in the United States. The two objections elaborated on in the discourse were that there is a constitutional convention against court-packing and that doing so would reduce the legitimacy of the USSC.

The legitimacy of the Court argument holds that changing the composition of the Court with the express purpose of altering outcomes will undermine the belief that the court is engaged in legal interpretation, and thereby deprive the judiciary of its legitimacy. If the definition of legitimacy is deference to decisions simply because they emanate from the Court, the question asked was whether the court even has legitimacy. Additionally, Presidential appointments to the judiciary have already blurred the law/politics distinction. So, would a slight further reduction in legitimacy even matter? Professor Tushnet expressed the view that the public observing USSC decisions with a more critical eye would be a good thing for democracy.

The final concern raised by Professor Dawood was the potential “constitutional hardball” that would ensue following a decision by the Democrats to court-pack. As Prof Dawood explained, constitutional hardball (a term which Prof Tushnet already wrote about several years ago) is played when politicians make claims or act in ways that are not technically constitutional but go against established norms and practices. It is seen as unfair for undermining the public’s understanding of the constitutional system. The concern is that if the Democrats do court-pack, the Republicans will retaliate when they have power again, essentially spiraling into a “tit-for-tat” battle. Professor Tushnet pointed out that hardball/tit-for-tat is actually the preferred strategy in game theory. It is how to escape the Prisoner’s Dilemma equilibrium and get back “on course.” This game of hardball is exactly what has been going on in the conflicts over the last few USSC appointments. On a practical note, hardball can only be played when the reigning party controls all of Congress and the White House, which is not likely to happen very fast after the next regime change. Professor Tushnet argues that elected politicians do not make such long-term decisions and will not care about the repercussions for their decisions in 4/8/12 years.

Overall, the Roundtable discussion involved a lot of speculation, as court-packing is only relevant in the scenario where the Democrats win Congress and the White House in 2020. In these uncertain times that could very well not be the outcome of the election. Nevertheless, Professor Tushnet raises an important point and suggests a potential tactic Democrats could use to combat a bench that is not likely going to be amenable to their policy agenda. The Roundtable presented a fascinating glimpse into the constitutional questions being raised by our neighbours to the south.