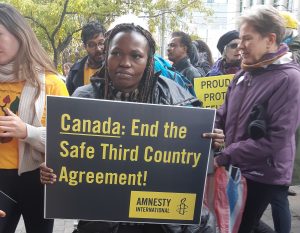 Dozens gathered in front of the Federal Court in Toronto this Monday, Nov. 4 to chant along in support of a legal challenge against the United States’ designation as a “safe country” under the Safe Third Country Agreement (STCA). A challenge years in the making, Asper Centre students in the Immigration and Refugee Law working group worked to support the applicants’ legal team by providing research and advocating in the media for the Agreement to be set aside.

The STCA is an agreement between the United States and Canada that requires refugee claimants request refugee protection in the first safe country they arrive in. The power to designate safe third countries resides in section 102 of the Immigration and Refugee Protection Act (IRPA). Factors to be considered when determining a country’s designation include its compliance with the United Nations Refugee Convention and the United Nations Convention Against Torture, as well as its human rights record.

The Canadian government is required to “ensure the continuing review” of the above factors for each “safe” country. This monitoring framework enables Immigration, Refugees and Citizenship Canada to identify changes in policies and practices that would considerably weaken the level of human rights and refugee protection that the country designated as safe provides.

In December 2004, Canada declared the United States a “safe third country”. It is the only country to receive such a designation under the Agreement. Practically, the agreement precludes asylum seekers from seeking refugee protection in Canada if they have come from or previously landed in the United States.

Given political and policy shifts in the United States since the election of President Donald Trump and even before 2016, many refugee advocates argue it is no longer a safe third country. For example, the United States currently limits asylum for women fleeing from domestic violence to only very exceptional cases.  It also prosecutes asylum-seekers who enter the country from points other than official ports of entry, contrary to international law.[1] Moreover, evidence shows that many people – including children – are being arbitrarily detained in immigration detention centres, in poor conditions and with little or no access to legal counsel.[2] This deprives asylum seekers from the ability to have a fair hearing.  Thus, the Agreement should no longer preclude asylum seekers who come from the United States from applying for refugee protection in Canada.

In 2007, a previous challenge to the STCA by three organizations– the Canadian Council for Refugees, Amnesty International, and the Canadian Council of Churches –was upheld at the Federal Court. However, this decision was overturned at the Federal Court of Appeal in 2008 on the grounds that in designating the US a “safe third country”, the Immigration and Refugee Protection Act only required the Canadian government to consider the factors listed in the Act; it did not require actual compliance with the UN Refugee Convention.

The current challenge to the STCA is being brought by three individual litigants and the three public interest organizations that brought the original challenge. They argue that the United States’ “safe third country” designation violates refugee rights under international law as well as section 15 and 7 rights guaranteed under the Canadian Charter of Rights and Freedoms. They also argue that the provision allowing the exemption ought to be struck down as ultra vires under administrative law.

Students from the Asper Centre’s Immigration and Refugee Law Working Group in 2018-2019 had the fantastic opportunity to hear from Erin Simpson, one of nine lawyers working on the legal challenge to the STCA. Simpson spoke to the students about the current situation in the United States, the status of the case, and what further information would be needed. This meeting prepared the students to research and prepare reports that were used for cross-examination in the case.

The work by students last year built on the research work of students in the 2017-2018 Asper Centre Immigration and Refugee Law Working Group which also helped Simpson with research in the development of certain arguments now being heard.

Throughout, students at the Faculty of Law’s Downtown Legal Services clinic in the Refugee and Immigration Division worked under the guidance of lawyer Prasanna Balasundaram to support the challenge by preparing memoranda on section 7 of the Charter, preparing for cross-examination, listening in on strategy meetings with the litigation team, keeping the files organized, and perhaps most importantly, supporting the individual litigant “ABC” and her family with issues arising in their day-to-day lives.

Challenges like this one depend on so many people coming together to fight for the rights-respecting, international law and Charter-compliant Canada we want. To have these arguments heard in Federal Court this week, it required the courage of the individual applicants whose lives were affected by the STCA, the hard work and dedication of the legal team and organizations advocating for the applicants, as well as the research and support of law students in the Asper Centre working groups and Downtown Legal Services clinic. As students, we were honoured to have contributed what we could and to have learned so much from being involved in this incredibly important work – work that many of us hope to continue to do and support for the rest of our careers.

Karen Chen is a 3L JD Candidate at the Faculty of Law. She was a leader of the Asper Centre Refugee & Immigration Law working group in 2018-2019, and also worked in the Downtown Legal Services clinic.

Shelby Rooney is a 2L JD Candidate at the Faculty of Law. She was a member of the Asper Centre Refugee & Immigration Law working group in 2018-2019.

Anju Xing is a 2L JD Candidate at the Faculty of Law. She was a member of the Asper Centre Refugee & Immigration Law working group in 2018-2019.