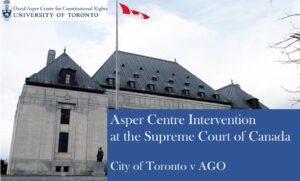 In a deeply divided 5 to 4 decision released today, the Supreme Court of Canada upheld the Better Local Government Act, 2018 as constitutional. This legislation was enacted by the newly elected Ford government in 2018, midway through an ongoing municipal election. The legislation reduced the number of wards of Toronto City Council from 47 wards to 25 wards.

A number of individuals, including candidates in the 47-ward election, challenged the legislation, as did the City of Toronto. It was argued that cancelling a democratic election more than halfway through the election period breached the Charter’s guarantee of freedom of expression, without justification. The challenge was successful at Divisional Court but failed at the Court of Appeal. The individual litigants dropped out of the litigation at this point and the City of Toronto appealed to the SCC.

The David Asper Centre for Constitutional Rights, represented by Alexi Wood of St. Lawrence Barristers LLP, intervened on the issue of freedom of expression under s. 2(b) of the Charter.

The Asper Centre is disappointed in the majority ruling in the SCC. According to Alexi Wood, “The majority decision fails to recognize the importance of electoral expression and has the potential to destabilize other types of expression in the future.”

The Asper Centre prefers the analysis set out in Justice Abella’s dissent, which held that the Act unconstitutionally interfered with the political dialogue between candidates and voters. The legislation was an unprecedented intervention midway through the election period, “destabilizing the foundations of the electoral process and interfering with the ability of candidates and voters to engage in meaningful political discourse during the period leading up to voting day,” according to the dissenting opinion. Justice Abella, quoting from the Asper Centre’s legal arguments, specifically noted how different aspects of the election period require protection: “All exercises of expression, at each and every stage of the electoral process – not only the final act of voting – must receive consistent and robust Charter protection” (paragraph 130).

Cheryl Milne, Executive Director of the Asper Centre, notes, “The majority and dissenting opinions represent very different views of our constitution with the majority taking a much narrower interpretation of freedom of expression, characterising the claim as a positive rights claim for an expressive platform and thus not protected by the Charter.”

Lorraine Weinrib, professor emerita at the University of Toronto Faculty of Law and a specialist in constitutional law and litigation, notes that the majority judgment embodies some novel features: “It does not emphasize the importance of the guarantee of the fundamental freedom of expression in protecting the full range of public participation in the vital context of the actual election period. It does not emphasize the importance of democratic deliberation and representation at the municipal level where, as has been so clear during the covid pandemic, local government carries out a distinctive and crucial role in making policy decisions, setting priorities, and providing services in a densely populated, exceptionally diverse context.”

In stressing the importance of the text of the Charter, the majority undermined the well-established understanding that constitutional principles provide fidelity to the Charter’s basic value structure in a changing world. The contrasting factual summaries in the reasoning in this case also makes clear that we need new rules for Charter litigation so that the litigants, whose personal accounts of the actual impact of complicated government legislation on their lives and the lives of their communities, can fully participate in the adjudication of their claims through the full litigation process.