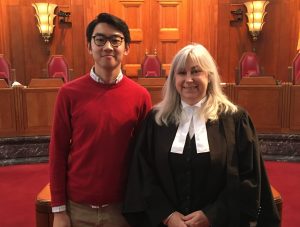 As a clinic student this term, I had the opportunity to hear the Asper Centre’s oral arguments in its intervention at the Supreme Court of Canada in the appeal of Ontario v. G, which took place on February 20, 2020. The appeal concerned the constitutionality of the Ontario and federal sex offender registry laws, which required offenders found not criminally responsible (NCR) to report to the registry for life, even if they had been absolutely discharged by the Ontario Review Board (ORB). Offenders not found NCR who receive an absolute discharge, record suspension, or pardon do not have to report to the registries. In this way, the claimant, G, who was found to be NCR after his criminal trial, argued that the Ontario and federal sex offender registry laws violated his s. 7 and s. 15 rights under the Charter.

Justice Doherty for the Ontario Court of Appeal did not find a s. 7 violation. However, he recognized that the sex offender registries drew a discriminatory distinction based on the ground of mental disability under s. 15 of the Charter, since the law reinforces the stereotype that NCR offenders are indeterminately dangerous. Under s. 1, the court focused on the fact that the reporting requirements for NCR offenders did not have any “exit ramps” even though similar “exit ramps” are available for non-NCR offenders. Justice Doherty found that this was not a minimal impairment of s. 15 rights and struck down the laws.

My experience working on this case provided me with an invaluable look into appellate advocacy. At the Supreme Court, the arguments focused on if the sex offender registry laws violated s. 15 of the Charter and security of the person under s. 7. Many of the Justices were critical of the government’s s. 15 argument, asking numerous questions on the implications of their evidence that NCR offenders are more likely than the average population to commit another offence. Although the Asper Center was only given five minutes, Asper Centre Executive Director Cheryl Milne effectively addressed all of our arguments, and the Justices seemed receptive. It was exciting to see the research I conducted on Hong Kong’s jurisprudence not only be included in our factum, but also mentioned in our oral arguments. Ultimately, we will have to wait to see if the Supreme Court will take our invitation to re-imagine the use of suspended declarations of invalidity as a constitutional remedy.

Jeffrey Wang is a 2L JD student at the Faculty of Law and is the current Half-time Asper Centre Clinic student.