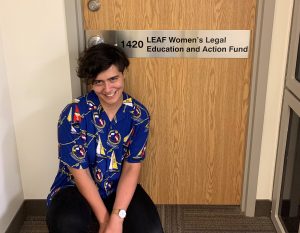 This summer I have been working at Women’s Legal Education and Action Fund (LEAF) as an Asper Centre Summer Fellow. LEAF works to advance women’s substantive equality rights through litigation, law reform, and public education, and I feel fortunate to have been able to assist the organization with its projects for the past two months.

My main responsibility is to work on LEAF’s project on image-based sexual violence, which can include surreptitious recordings, “deep fakes,” “revenge porn,” and other forms of non-consensual creation and distribution of intimate and sexualized images. This project follows LEAF’s intervention in R v Jarvis, a case heard at the Supreme Court of Canada (SCC) earlier this year that concerned a high school teacher secretly recording his female students’ cleavage using a camera in his pen. Thankfully, after some unfortunate precedents in Ontario and other provinces, the SCC clarified that the voyeurism provisions of the Criminal Code prohibited Mr. Jarvis’s conduct, and that women did not leave their expectations of privacy at the door when they left their homes.

The aim of this project is to consolidate Canadian and international responses to image-based sexual violence and identify best practices for its regulation. This resource would then be used for LEAF’s future interventions as well as inform its policy proposals and recommendations to governments.

I am very excited to be working on this project as it concerns a new and developing area of law. In that sense, LEAF is not trying to retroactively fix rape myths and stereotypes embedded in the law but actually set the agenda by ensuring that the legislatures, courts, and administrative bodies shape laws in line with women’s equality. While nowadays it is less acceptable to disparage survivors for having “asked for it,” such attitudes are still common when it comes to internet-based hate and abuse. For example, the judge in one of the cases that I researched is of the view that, to avoid receiving death and rape threats on Twitter, women should just stay off social media. However, just as drinking alcohol is not a permission for sexual advances, sending intimate images to one’s partner is also not a permission for those images to be posted on pornography websites. There is no clear line between our lives online and offline, and the courts need to adjust to that reality as soon as possible.

Aside from the image-based sexual violence project, I have also contributed to research in support of a potential intervention in R v Fraser. This case is on appeal to the SCC and concerns RCMP’s discriminatory pension policy towards part time employees, who are almost all women with childcare responsibilities. This is a very important case as it touches on how the pension system rewards full time, long-term, high-paying, permanent employment and effectively disregards and devalues part-time work, housework, and caring labour, which characterizes work overwhelmingly done by women. I hope to be involved with the case later into the school year.

I have also supported the LEAF staff in completing several other reports and submissions. I started my fellowship by contributing to LEAF’s chapter for a report created by the Centre for Policy Alternatives about Canada’s implementation of the Beijing Platform for Action. The Beijing Platform concerns gender equality and was adopted by Canada and other countries at the Fourth World Conference on Women in 1995. The signatories will convene in 2020 for the UN’s summit on Commission on the Status of Women in 2020 to evaluate their progress.

Another highlight of my summer thus far has been working on a project about alternative methods of sexual assault adjudication. I have written and contributed to chapters on campus sexual assault mechanisms, criminal injuries compensation programs, specialized domestic violence and sexual violence courts, and restorative and transformative justice approaches to sexual assault. I also assisted with drafting LEAF’s submission to the Law Society of Ontario on access to justice.

Last but not least, one of the most exciting aspects of my fellowship has been to connect with feminist legal scholars and practitioners from all over the country. It was reading the writing and work of these individuals that motivated me to go to law school in the first place, and it has been truly an honour to be able to meet and work with them during my time at LEAF. Overall, I have had an extremely fulfilling experience at LEAF, and I recommend this fellowship to students interested in using their legal knowledge and skills for social justice.

Paniz is a 2L JD Candidate at the Faculty of Law, and was awarded an Asper Centre fellowship to work at LEAF this summer.