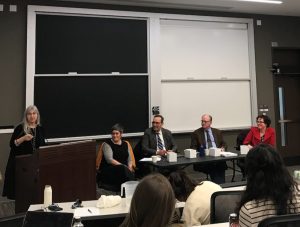 On January 22, 2020, the Asper Centre hosted three lawyers involved in two cases before the Ontario Court of Appeal (ONCA) in which the Asper Centre intervened — R v Morris and R v Sharma — which consider how historical and social context can invaluably inform the sentencing process for marginalized people.  Emily Hill (Aboriginal Legal Services, intervener in Sharma and Morris), Jessica Orkin (Goldblatt Partners, counsel for Asper Centre in Sharma), and Nader Hasan (Stockwoods LLP, counsel for Asper Centre in Morris) participated in a dynamic panel, moderated by Professor Hamish Stewart of the University of Toronto’s Faculty of Law, discussing how historical disadvantage can be considered in sentencing to achieve substantive equality for marginalized groups.

Hasan started the panel discussion by describing Morris and Sharma as seminal cases that motivate one to become a criminal lawyer. Sharma is a constitutional challenge to ss. 742.1(c) and (e)(ii) of the Criminal Code, which eliminate conditional sentences for certain offences with mandatory minimum custodial sentences. Sharma is a young, mixed Indigenous mother convicted of a drug importation offence, who sought a conditional sentence so she could continue caring for her child. She would have been a suitable candidate for such a sentence but for these provisions preventing drug importers from receiving a conditional sentence.

Sharma’s circumstances illustrate that despite the Supreme Court’s (SCC) aspirations in Gladue, incarceration rates for Indigenous people in Canada continue to increase. Gladue outlined how the principle of restraint in s. 718.2(e) of the Criminal Code should be applied while taking into account the history of colonialism and bias in the criminal justice system when sentencing Indigenous offenders. That was more than two decades ago. “The Indigenization of Canada’s prison population is nothing short of a national travesty,” according to Correctional Investigator of Canada Ivan Zinger in a troubling statement released a day before this panel. He warned that number and proportion of Indigenous individuals under federal sentence has reached new historic highs (30% of the total inmate population, compared to 5% of the Canadian population) due to “disturbing and entrenched imbalances.” The numbers are even more troubling for Indigenous women, who now make up 42% of female inmates.

Sharma is about addressing these statistics and the crisis of Indigenous overrepresentation, “pushing the court to get to a solution,” according to Hill. When the justice system criminalizes acts that Indigenous women often turn to out of desperation due to high rates of poverty and food insecurity, conditional sentences are an essential and effective tool for keeping Indigenous people out of jail so that they can serve their sentences in the community, while maintaining jobs, schooling, and caring for their families and children. Hill also raised the difficulties of relying on the Charter’s s. 15 equality argument in Sharma, with the trial judgement barely engaging (or agreeing) with their points — despite that Truth and Reconciliation Commission called for the federal government to allow judges to depart from mandatory minimum sentences and restrictions on conditional sentences (which the government committed to). The SCC’s 2018 decision in Alliance, tackling an amended s. 15 analysis involving the removal of a legislative remedial scheme (pay equity in that case), could have been a “game-changer” in Sharma, suggested Orkin. “Everybody has been looking to ways to advance equality arguments other than through s. 15, because the test in s. 15 is so inchoate, onerous, and unpredictable,” she said, including through s. 12 (cruel and unusual treatment or punishment).

In Morris, the ONCA will consider how systemic factors should shape the sentencing framework for Black Canadians. Morris, a Black man, was convicted of possession of illegal firearms and received a 12-month sentence, reduced from 15 months for Charter breaches. In his decision, the sentencing judge was mindful of the personal social context in which Morris committed the offence (among other mitigating and aggravating factors), referencing reports from anti-Black racism experts to paint a picture of Morris as a product of systemic discrimination, which colours the lived experiences of many Black Canadians. The Crown appealed the sentence on the ground, among others, that the judge erred by imposing an unfit sentence.

Hasan pointed to a predecessor to Morris from 2004, R v Hamilton, where two single Black mothers were found guilty of smuggling cocaine. They asked the court to consider a Gladue-like framework to impose conditional sentences, as they were similarly situated to Indigenous offenders, with life experiences shaped by the legacies of colonialism and systemic racism. While the trial judge imposed conditional sentences on the two women, the ONCA found he erred in concluding that conditional sentences were appropriate because of the effects of systemic racism, making it clear that an offender’s membership in a historically disadvantaged group does not justify a lesser sentence. Hasan believes the time has come to revisit and overturn the ONCA judgment. Sixteen years later, the impact of systemic racism on Black Canadians — although different historical circumstances than Indigenous peoples — is now accepted as fact by mainstream society.

While the Crown in Morris agrees that systemic factors such as historical disadvantage can be considered in sentencing cases involving Black Canadians, they want to set up obstacles to access a remedial Gladue-type framework for Black Canadians with a high evidentiary onus. “The Crown wants the accused person to prove that systemic racism caused his or her offending behaviour. How do we prove that?” asked Hasan. The SCC has rejected the “causal link” requirement in the context of Indigenous sentencing in R v Ipeelee.  “Youth is a mitigating factor in a sentencing process. But we never ask a young person to prove how your youth caused you to commit this particular offence. It’s nonsensical. It’s an impossible burden,” Hasan said, a burden even experts struggle to meet. Furthermore, the Asper Centre argues it is unfair to ask marginalized people to demonstrate their life circumstances “caused” their crime, putting forward more robust guidelines for considering these factors informed by substantive equality principles.

While it makes sense that Morris be the next leap after Gladue for a remedial framework in sentencing, Hasan agreed that there may be a concern among jurists of this “slippery slope” argument opening up the “floodgates.” The fear may be that every racialized accused will use this argument. “That is not an elegant argument or a legal argument. But it is a real hurdle,” he said. Orkin added that some of that fear comes from a fundamental misunderstanding of what Gladue is trying to do (as SCC outlined in Ipeelee): it is not a “get out of jail free card,” but about realizing the goal of a fit sentence guided by the principles of substantive equality, which help achieve that goal.

Orkin discussed the benefits and challenges to representing joint public interest intervenor clients in test case litigation. The Asper Centre and the Women’s Legal Education and Action Fund (LEAF) are jointly intervening in Sharma, with Orkin representing both clients as a single party. “There are particular challenges in the criminal justice sphere, in some cases, for working with public interest groups like LEAF, whose perspective draws on different feminist strands,” she said. While defence counsel is focused on the accused, in many contexts, the feminist concern is on the complainant. While not an issue in Sharma or Morris, if conditional sentencing falls for Sharma, for example, it would also fall for a wide array of cases that include various sexual offences. So, dealing with different organizations could result in joint clients disagreeing because of their divergent public interest policy lens on an issue, mirroring society’s diverse conceptions of what the criminal justice is and who it serves.

Mashoka Maimona is a 2L JD student at the Faculty of Law and was an Asper Centre Clinic student in Fall 2019.