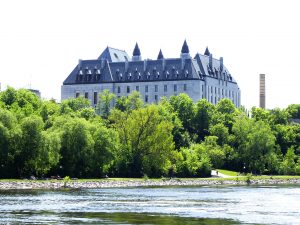 On July 10th, 2020, the Supreme Court of Canada released its judgment in Reference re Genetic Non-Discrimination Act (2020 SCC 17), a reference case coming out of the Quebec Court of Appeal. At issue was whether Parliament had constitutional jurisdiction under criminal law powers provided in s. 91(27) of the Constitution Act, 1867, or whether the law fell solely within provincial competence over property and civil rights under s. 92(13). In a five-four decision, the Supreme Court of Canada overturned the ruling made by the Quebec Court of Appeal and held that the law was within Parliament’s jurisdiction under its criminal law powers.

In 2017, Parliament passed the Genetic Non-Discrimination Act on a free vote without government support. Among other things, the Act made it an offence punishable by indictment or summary conviction for anyone offering goods, contracts, or services to compel any person to undergo genetic testing or disclose its results. In the same vein, withholding goods, services, or contracts for refusing to undergo such testing was also prohibited, as was collecting, utilizing, or disclosing genetic testing information without a person’s written consent. The Act also established exceptions to these rules for certain medical and research purposes.

Following the passage of the Act, the Attorney General of Quebec, joined by the Attorney General of Canada, presented a reference question to the Quebec Court of Appeal submitting that ss. 1 – 7 of the Act were ultra vires.  They contended that the act fell solely within provincial property and civil rights powers set out under s. 92(13) of the Constitution Act, 1867 and not under federal criminal law powers set out in s. 91(27).

To assess this division of power argument, a court must establish what the “pith and substance” (R v Morgentaler [1993]), also called the “dominant purpose” (Reference re Assisted Human Reproduction Act) or “true subject matter” (Reference re Pan-Canadian Securities Regulation) of the impugned provision is and determine whether that subject matter falls within the scope of a matter under federal authority. In defining the “dominant purpose” of the impugned provision, a court must look to its purpose and effects (both legal and practical) (Firearms Reference). To fall under criminal law powers, the pith and substance of the impugned provision must 1. consist of a prohibition; 2. be accompanied by a penalty; and 3. be supported by a criminal law purpose. In this case, whether there is a valid criminal law purpose to the provision was the primary issue for the Court.

In 2018, the Quebec Court of Appeal concluded that the Act did not fall within federal competence. It held that, in pith and substance, the law was meant to promote public health by encouraging the use of genetic testing by assuaging fear that the results may be used against someone. It also held that the impugned provision did not, in pith and substance, prohibit or address discrimination (Para 12). In its determination that this goal was not a valid criminal law purpose, the Court of Appeal distinguished the goal of promoting public health from defending public health against “intrinsic threats” such as drugs and tobacco. Instead the court held that the law regulated information available for employment and insurance purposes, and fell within provincial competence over property and civil rights (Para 13)

The Canadian Coalition for Genetic Fairness, acting as amicus curiae, appealed to the Supreme Court of Canada.

Justice Karakatsanis’ plurality opinion differed significantly from the Court of Appeal on the proper characterization of the pith and substance of the impugned provisions.

In determining the provisions’ purpose she rejected the idea presented by the Court of Appeal and other justices on the Supreme Court that the dominant purpose of the Act was to increase the public’s willingness to undergo genetic testing, and took a broader view that the law was meant to prevent discrimination and address Canadians’ fears that their genetic test results could be used against them. This difference in description was based primarily on a broader interpretation of the Parliamentary record and a willingness to examine the purpose of the provisions in the general context of the Act. In examining effects, she held that the practical effect of the impugned provisions was to give individuals control of their genetic testing data in a broad and general sense. By adopting a broad and general interpretation of the law’s effects, J. Karakatsanis also rejected the position, presented in J. Kasirer’s dissent, that the provisions served mainly to regulate insurance contracts.

In discussing the scope of Parliament’s criminal law authority over public health, the plurality held that “…[P]arliament is entitled to use its criminal law powers to respond to a reasoned apprehension of harm, including a threat to public health” (Para 96) and “no degree of seriousness of harm need be proved before it can make criminal law” (Para 79).  Justice Karakatsanis held that such a reasoned apprehension of harm existed in this case and rejected the idea that Parliament’s criminal law powers could be effectively limited by a notion of “evils” or moral threats. Justice Kasirer, in his dissent, would have derived a more strenuous “real threat of harm” standard from the criminal jurisprudence’s past references to “evils.”

While Justice Moldaver wrote in agreement with the result of the case, his characterization of the dominant purpose of the provisions represents something of a middle ground between J. Karakatsanis’ position and that of the Court of Appeal.

While he recognized that preventing or decreasing the likelihood of discrimination was an important facet of the provision, he held that it was not the dominant purpose. Instead, he looked to the health-centred definition that the Act gives to genetic testing, and to his own view of the Parliamentary record, and found that the dominant purpose of the Act was to protect public health against the threat that people would forego genetic testing out of fear that they would not have control over the test results.

In assessing whether Parliament’s criminal law authority applied to this alleged threat to public health, J. Moldaver declined to take a side between a “reasoned apprehension of harm” or a “real threat” standard, but stated that he would have found that Parliament was justified under either framework. In his view, the threat of detrimental health effects due to people foregoing genetic testing was real and well-defined, and the indirect methods used to tackle it were analogous to the federal powers exercised against tobacco advertising in RJR-Macdonald.

Justice Kasirer rejected J. Karakatsanis and J. Moldaver’s characterizations of the pith and substance of the provisions, instead following the Court of Appeal’s approach.

He rejected the proposition that the impugned provisions of the Act were meant to combat genetic discrimination based on the idea the text did not prohibit it outright. Instead he argued that the sole dominant purpose of the Act was to promote usage of genetic testing and that goals of protecting individuals’ control over their data or making discrimination harder were solely ancillary to that purpose. In evaluating the effects of the provisions, he placed significant weight on the impacts they would have on the insurance industry, identifying the dominant purpose of the provisions as “removing the fear that information from genetic tests could serve discriminatory purposes in the provision of goods and services, in particular in insurance contracts, in order to encourage Canadians to avail themselves of those tests ” (Para 221).

In applying this characterization to criminal law powers, J. Kasirer argues that a mere deleterious effect on the public good is insufficient to capture the attention of criminal law. Instead, J. Kasirer argues that impugned legislation should 1. relate to a public purpose, 2. respond to a well-defined threat to be suppressed or prevented, and 3. relate to a threat that is “real” in that Parliament had a concrete basis and reasoned apprehension of harm when enacting the impugned legislation (Para 234).

Based on this standard, J. Kasirer went on to conclude that the threat to health, or privacy and autonomy, were not sufficiently well-defined and that there was no evidentiary basis to conclude that such a threat, even if better defined, presented a real threat of harm. He also rejected J. Moldaver’s position on harm arising from undetected diseases by stating that combatting such a harm was only a secondary effect of Parliament’s effort to promote genetic testing.

As such, J. Kasirer concluded that the provisions did not fall within federal powers over criminal law, but under provincial powers over property and civil rights.

By upholding federal jurisdiction over genetic testing, the Court has significantly expanded privacy protections for individuals undergoing such procedures. Nevertheless, the Court missed an opportunity to find majority support for a clear demarcation of the nature of threats that Parliament may respond to under criminal law powers. This failure to establish a predictable standard will likely lead to continuing uncertainty in federalist jurisprudence.

Nicholas Buhite is a 2L JD Candidate at the Faculty of Law.