Jonathan Rudin, program director at Aboriginal Legal Services and experienced litigator, will be co-teaching the Asper Centre’s Clinic course as the new Constitutional Litigator-in-Residence for Fall 2021. Mr. Rudin has written widely and spoken passionately on the topic of aboriginal justice and has advocated countless cases before all-levels of Canadian court. We are very fortunate to have him join our faculty at the law school this coming term.

Mr. Rudin’s interest in the law emanated from a desire to influence social change, a desire which served as the driving force behind his motivation to attend law school. Yet, for just over a decade after graduating and getting called to the bar, he did not work directly in law. Instead, Mr. Rudin opted to work with social justice organizations, where he could focus on fundraising and organizational development: “I wanted to get involved with things that I felt were working more broadly and systemically to address issues,” rather than “putting a Band-Aid on a gaping wound.”

However, this social justice work ultimately led Mr. Rudin to a career in litigation. His involvement with several indigenous organizations coupled with the knowledge he gained while completing his Masters in Constitutional Law at Osgoode Hall, piqued his interest in indigenous justice and culminated in an opportunity to work for Aboriginal Legal Services. ALS marked the beginning of Mr. Rudin’s engagement with constitutional litigation, allowing him to intervene in a number of significant and noteworthy cases. Of these, Mr. Rudin described R v Gladue and R v Ipeelee as two cases which stand out as most memorable to him. “You don’t always know going in how significant a case will be, how the court is going to take it, or what they are going to focus on.” Mr. Rudin emphasized the real issues and consequences at play in bringing constitutional challenges: “when you do this sort of work, especially if it is constitutional, you don’t just lose for your client, there are bigger issues at play.”

Mr. Rudin plans to bring the litigation experience he’s gained at ALS to the University of Toronto Faculty of Law this fall, offering students a practical perspective and sharing insights as to what constitutional litigation really entails. He hopes to convey “a sense of how the process works and what it takes.” His experiences speaking before the Court have taught him valuable lessons in what judges want: brevity, clarity, and structure. “Writing a factum or doing oral arguments before the court, you are presenting things to an audience: judges. This is a very different audience, and one we are not familiar with playing to.” He plans to share these lessons, alongside many more, through the clinic.

In the meantime, I asked Mr. Rudin if there was any advice he could offer to current law students. He remarked how difficult being a law student during a global pandemic must be and the inevitable fatigue that must accompany zoom law. In fact, Mr. Rudin described the challenges he faces as a lawyer working in a COVID world. “A lot of the work I do, it’s not me, it’s a whole team of people working together,” and meeting over zoom can certainly change professional dynamics. Mr. Rudin expressed his hope that next fall he will be able to meet with students in person. To mitigate zoom fatigue and the exhaustion that can come from the demanding nature of law school generally, Mr. Rudin stressed the importance of maintaining interests and activities outside of the law. For Mr. Rudin, this takes the form of regular jam sessions with his band: Gordon’s Acoustic Living Room.

Additionally, Mr. Rudin encourages current students to keep an open mind as they navigate through their years of law school. Often times, he remarked, students have a pre-conceived notion of what area of law they want to pursue without knowing much about what it really entails. “There are all sorts of areas of law that we know nothing about and the more opportunities you have to try things the better.” He lauded the Asper Centre’s clinic as giving students a real sense of what working in constitutional law encompasses. He encourages students to take the opportunities the clinic has to offer and looks forward to meeting students in a few short months.

Leila Far Soares is an incoming 2L JD student at the Faculty of Law and is currently one of the Asper Centre’s summer research assistants.

Focused on Canada’s 150th anniversary of confederation and the development of Canada’s constitutional and human rights from the British North America Act to the Canadian Charter of Rights and Freedoms, the series will include papers that provide an analysis of constitutional litigation throughout Canada’s history with a focus on seminal cases that have made an impact on the Canadian constitutional rights landscape. 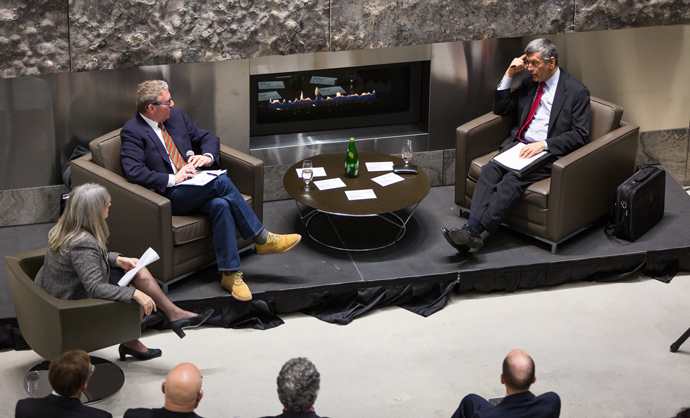 On a cold November evening, the David Asper Centre for Constitutional Rights convened a fireside discussion of these questions in the Jackman Law Building.  The discussion featured alumni Raj Anand, LLB 1978, a prominent constitutional litigator and bencher of the Law Society of Upper Canada, and David Asper, LLM 2007, the Centre’s founder and a successful criminal/constitutional litigator.  (Most notably, Asper represented David Milgaard in overturning Milgaard’s wrongful conviction.)

Cheryl Milne, executive director of the Asper Centre, chaired the discussion, the focus of which was the Court Challenges Program (“CCP”).  Created in 1978, the CCP funded legal challenges to laws offending equality and official language minority rights guaranteed under the Canadian constitution, including the Charter of Rights and Freedom.  The program has funded more than 1,200 cases, but has also been cancelled, twice, by governments averse to funding challenges to their own laws.  The current Liberal government plans to revive the CCP, and is undertaking consultations to this end.

The discussion was a study in contrasting viewpoints: Anand’s more conservative (reflecting his long experience as a member of the CCP’s Equality Rights Panel), and Asper’s more radical.  Asper was adamant, for example, that the CCP’s strength comes from its independence.  “It’s irresistible, in my view, that when you have an organization whose objective is to challenge the government, sooner or later the government will defund you—whatever the stripe.”  Anand replied that perfect independence is impossible: “Ultimately, public money has to be carefully safeguarded and spent pursuant to government policies. So, like it or not, there are always public servants that have a direct and indirect impact on the program.”

Asper was unmoved, suggesting at one point that the CCP will always be “a sitting duck for government.”

While both lamented the CCP’s suspension by the Conservative government in 2006, they fastened upon different effects as being most significant.  Anand noted the deleterious effect on s. 15 of the Charter (equality rights) jurisprudence because of fewer, and more poorly supported, cases being brought to trial.  (“The kinds of arguments that were brought… became very weak.”)  Asper characterized the CCP’s suspension as anti-constitutional: “It sent a signal to Canadians that we were somehow less willing to get into the risk of rights litigation.  It was totally contrary to the spirit of the Charter.”

Milne then asked whether, given the CCP’s inherent limitations (in addition to independence issues, the CCP’s funding mandate—limited to equality and official language minority rights cases—has long been criticized as far too narrow), the CCP was the best way to support Charter litigation in Canada.

Asper dismissed this as a red herring.  “Something is better than nothing,” he said, “but the discussion of CCP is a Band-Aid to a much more significant problem in the Canadian justice system.”  Specifically addressing those in the audience watching live via webcast from Ottawa, he continued, “I believe that the courts, and the things that radiate inward from courts—judges, lawyers, systems, processes— are failing us.  The court system itself is the biggest barrier to the adjudication of Charter rights.”

Anand was much more circumspect.  “I think it’s a bit of a distraction to say that we have a bigger problem [i.e., access to justice] and therefore we shouldn’t look at this little problem [the CCP] and try to fix it.  We have a rare opportunity here, and the question should be how we put this program back in place more durably and more effectively than the previous program.”

The ensuing discussion canvassed various alternatives to constitutional litigation, including less reliance on traditional adversarial processes (at the cost of establishing fewer binding precedents), a specialized constitutional court (diametrically opposed to the Supreme Court of Canada’s view on which tribunals can adjudicate Charter claims), and reformed civil procedure rules.  Several members of the audience wondered at the viability of privately funded litigation supplanting the CCP, such as US-style charitable organizations seeking public interest standing to bring constitutional challenges.

No consensus emerged, and the discussion concluded with Asper underlining the ongoing—soon to be imminent—need to re-engage Canadians on the importance of Charter litigation following the CCP’s suspension in 2006: “We’ve probably come through an era of government where [the Charter] wasn’t so popular,” he said, “and that’s no longer the case.”  Asper concluded by reminding the audience of what he sees as the broader context for the reformed CCP.  Once again addressing the audience watching by webcast, he said, “Canadians are losing faith in our justice system as we continue to talk about doing all these things to fix it, and don’t fix it.”