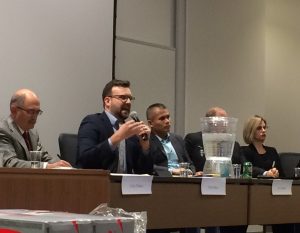 By Erika Voaklander and Solomon McKenzie

At the end of 2017 the Supreme Court of Canada (SCC) heard arguments in the two Trinity Western University (TWU) appeals. The results of the appeals may have wide and deep impacts on the legal profession and on Canada more broadly.

Trinity Western University is a private Christian university in British Columbia. TWU wanted to open a law school. The school provides an education founded on evangelical Christian principles. TWU’s approach to community development is expressed in a community covenant, a code of conduct that encourages its students to live by Biblical teachings. Amongst other considerations, the covenant prohibits sexual intimacy that violates the sacredness of marriage, as defined as between a man and a woman. Unmarried individuals are expected to live celibate lives. While LGBTQ students are permitted to attend the university, TWU would prohibit admission to its law school if a student refuses to sign the covenant.

The appeals involve legal challenges to decisions by the law societies of Ontario and British Columbia. Ontario decided to deny the accreditation of future TWU law graduates. The Court of Appeal of Ontario held that Law Society of Ontario’s (LSO) statutory mandate to act in the public interest entitled it to refuse to accredit TWU’s law school. The LSO refused to accredit on the basis that the covenant was discriminatory. BC, on the other hand, initially approved accreditation, but reversed this decision based upon a referendum it held with members. The BC Court of Appeal upheld the lower court’s decision to overturn this second decision.

The panel discussion explored the case, other legal precedents and wider considerations of constitutional advocacy. In their general discussion of the case, Chris Palliare highlighted that the SCC’s decision would likely hang on how the court defines and places boundaries on the freedom of religion enshrined in the s. 2(a) Canadian Charter of Rights and Freedoms. Additionally, Barry Bussey noted that this issue also turns on jurisdiction, notably whether the Law Society of Ontario has the right to bar membership.

An early fault line in the discussion was when the panelists considered the 2001 TWU v British Columbia College of Teachers (BCCT) case. Both Angela Chaisson and Joanna Radbord suggested that there have been many social and legal changes around LGBTQ+ rights since the finding in BCCT. Angela Chaisson asserted that the two cases were overwhelmingly dissimilar, involving different parties and underlying statutes, and with Canadian society having substantially progressed on LGBTQ+ rights since 2001. By comparison, Barry Bussey asserted the similarities between the two cases, and warned that a finding that essentially overturned BCCT would have a knock-on effect on evangelical and other religious communities’ abilities to continue to operate professional and educational facilities.

In considering the long-term impact of the TWU appeals, Derek Ross stated that the Court was at a crossroads in its recognition of religious communities’ freedom of association (s. 2(d) of the Charter). He warned that there could be deleterious impacts on the rights of religious communities. He noted that the Court supporting the LSO would be tantamount to finding it acceptable for state actors to quash the rights of groups externally assessed to have distasteful beliefs. Chris Palliare questioned the relevance of s. 2(d) to this case, and maintained that the analysis should focus on s. 2(a) religious freedom rights. Both Barry Bussey and Derek Ross stressed that a finding against TWU would have extensive and negative impacts on religious rights.

In considering what this ruling would mean to LGBTQ+ rights, Joanna Radbord noted that given the fixed number of law school spaces, allowing accreditation would diminish the ability for LGBTQ+ students to access law school. She also stressed that drawing evangelical students to one law school would intellectually impoverish the legal community at large, by hindering fruitful and diverse discussion. She highlighted the panel as an example of how law schools should act as meeting places of diverse worldviews. Paul Johnathan Saguil noted that he could have seen himself going to TWU at an early stage in his life, which would have had long term and negative impacts on his development. Angela Chaisson noted that the case was not necessarily zero-sum, and there could still be positive impacts for LGBTQ+ rights encapsulated in an adverse decision.

Finally, the group discussed the impact of the recent changes to the length of submissions by interveners down to 5 minutes of oral advocacy. Chris Palliare intoned that this was a mistake, stressing that the Court should accept fewer interveners, speaking for longer periods. Derek Ross noted that a greater number of perspectives was always welcome. Barry Bussey remarked that the new time limit meant that submissions had to be drafted in a strategic manner. In his preparation, he found that 5-minute submissions constituted 500 spoken words, a very limited space for nuanced reflections. Angela Chaisson agreed that fewer interveners were important, but that the SCC needs to start promoting the voices of people directly affected by the law. She questioned the validity of the court’s initial decision to grant no LGBTQ+ groups intervener status. Joanna Radbord noted the incredible role modelling that comes from having queer women as advocates before the SCC.

All the panelists stressed the importance and rewarding nature of constitutional advocacy. They underscored that interested students and lawyers should seek out pro-bono activities, actively pursue this type of work through their firms, connect to ongoing efforts through their own communities, and look to the David Asper Centre for opportunities.