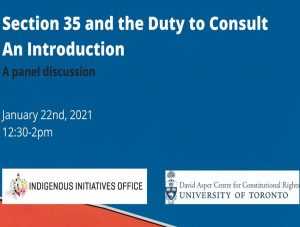 Arising from the Honour of the Crown, the duty to consult is a central tool in the protection of Aboriginal rights and the promotion of Crown-Indigenous reconciliation in Canada. As summarized by Professor Kerry Wilkins, adjunct professor at the University of Toronto Faculty of Law, the “Crown has a duty to consult a given Indigenous community when it is contemplating conduct that to its knowledge might have an appreciable adverse impact on an Aboriginal or treaty right that [the] community has or credibly claims”. Despite a series of notable and high-profile cases, there remains significant ambiguity in the law surrounding this important duty.

On Friday, January 22, 2021, the Asper Centre’s Climate Justice student working group and the Indigenous Initiatives Office (IIO) at the Faculty of Law convened a panel discussion titled An Introduction to s.35 and the Duty to Consult, providing an opportunity for the law school community to learn about the current state of the duty to consult and engage with open questions surrounding the doctrine. The panel was moderated by Professor Kerry Wilkins who was joined by Joel Morales (Counsel at Olthuis Kleer Townshend LLP) and Candice Telfer (Acting Director of the Legal Services Branch in Ontario’s Ministry of Indigenous Affairs). Elder Constance Simmonds (Cree-Metis Knowledge Keeper and Elder-in-Residence at the Faculty of Law) opened and closed the panel with her thoughts and prayers. The student organizers of the event (Maddie Andrew-Gee, Yara Willox and Haleigh Ryan) drafted a Primer about the Duty to Consult, as background to the event, with additional recommended readings.

Professor Wilkins began the discussion with a brief overview of the law on the Duty to Consult, beginning with its first mention in R v Sparrow as a relevant and possibly necessary component to the Crown’s successful justification of any infringement of an Aboriginal right. The duty is triggered by 3 elements: 1) Crown knowledge (of the asserted or proven Aboriginal right); 2) Crown conduct (excluding legislative activity); and 3) potential for adverse impact (above the de minimis threshold). Once the duty has been triggered, its content and scope are proportionate to the preliminary assessment of the strength of the Indigenous community’s claim and the likely severity of the adverse impact. 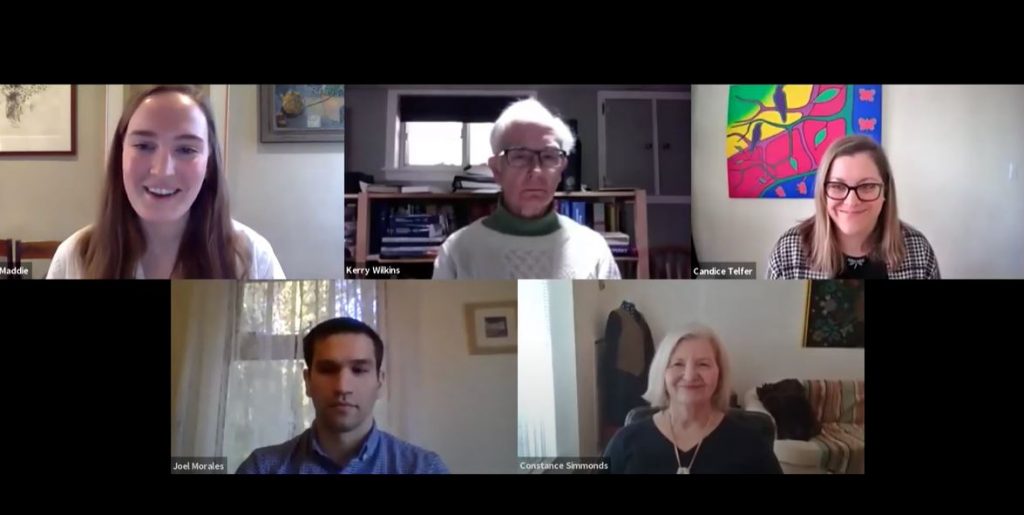 This notion of a “preliminary assessment” gives rise to several questions. Assuming the Crown is responsible for conducting the assessment, do they have a duty to share the results with the Indigenous community and provide them with an opportunity to correct it? Is the assessment a constitutionally necessary part of the consultation exercise? Morales argued that “if there is going to be a preliminary assessment, the Indigenous group should have a say in what goes into that” particularly where there are sacred sites or interests being impacted that were previously undisclosed due to concerns arising from colonial practices. Telfer contended that the government should still be entitled to privilege for any legal advice they utilize as part of the assessment but agreed that Indigenous communities should be given an opportunity to “fill the gaps” where the Crown is missing information. Wilkins noted that the Supreme Court’s judgment in Beckman v Little Salmon/Carmacks First Nation [1] suggests that a formal preliminary assessment is not strictly necessary so long as the required level of consultation is ultimately discharged. Nevertheless, the panelists agreed that whether or not it is legally required, a collaborative and transparent assessment is in the interests of both parties as a means of “promoting engagement and negotiation between Indigenous communities and government decision-makers.”

Another practical issue that arises with the duty to consult is that while there are numerous instances in which such a duty may be triggered, Indigenous communities have historically and continue to lack resources to fully participate. Given this reality, to what extent does the Crown have a responsibility to facilitate Indigenous participation by providing funding or resources? In responding to this question, both panelists stressed the importance of meaningful Indigenous participation in consultation. For the Crown, providing funding is important not only from a legal perspective but also a policy one because “if a community can’t meaningfully engage in consultation, there are [legal and pragmatic] risks for the government in moving forward,” said Telfer. While noting that some government funding is available, Morales framed the issue of adequacy of funding in terms of the “friction” between processes that the Indigenous community believes to be necessary and those that the Crown is willing to fund. From a legal standpoint, Wilkins noted that there was no case law establishing a strict legal requirement for the Crown to provide funding but the SCC has appeared to take into account the presence or absence of funding in its overall appraisal of whether the Crown’s consultation was sufficient [2]. Elaborating on this point, Morales cited Saugeen First Nation v Ontario [3] where the Court held that “[the parties] should not have reasonably expected the First Nation to absorb all the consultation costs” where the “expense of the consultation arose out of the proponent’s desire to see the project through and the Crown’s desire to see it move ahead”.

The panel then addressed a further significant practical issue of ascertaining which rights-holders need to be consulted where there is controversy about who legitimately speaks for the community. Given that the tension was itself created by the government’s imposition of the Indian Act’s Band Council model on Indigenous communities’ traditional governing structures, Morales suggested that “[Indigenous communities] should be allowed to work it out [internally] before the consultation projects happen.” While this would inevitably create delays, Morales noted that “Indigenous communities have waited a long time to even be at the table” and “shouldn’t be seen to be holding up projects due to government structures and policies being imposed on them unilaterally”. While Telfer agreed that she would be uncomfortable with the government imposing a view as to the legitimate authority where the community itself is fractured, “on a pragmatic level, there are decisions the government needs to make […] with immediate and broad impacts where time may be a luxury”. In such circumstances, “we need to think about meaningful engagement across these divisions in order to move forward,” added Telfer. “One option the Crown has,” Wilkins suggested, “is to consult with all the different conflicting claimants to make sure it has the benefit of all points of view.” However, this may be complicated where one group refuses to participate if another group is consulted.

Ultimately, as Wilkins remarked in closing, in many aspects of the doctrine on the duty to consult “the Supreme Court of Canada has left itself and lower Courts with great flexibility to reach the result they want to reach in particular cases.” As a result, there remains significant inconsistency in the doctrine affecting its utility as a tool for reconciliation. Nevertheless, as Elder Constance Simmonds reminded us in closing, as human beings “we all have a stake in protecting the land and the water;” thus, “for future generations, these are really important conversations.”

A recording of the webinar is available here.

Annie Chan is a 1L JD student at the Faculty of Law and is currently an Asper Centre work-study student.