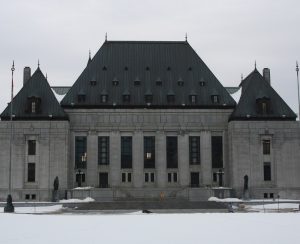 The Asper Centre will be at the Supreme Court of Canada (SCC) as an intervener in two separate cases next month: Gillian Frank v Attorney General of Canada and Spencer Dean Bird v Her Majesty the Queen.

First up on March 16, 2018 is our intervention in Bird, an important case about prisoners’ rights in Canada.  In this case, the appellant was sentenced to a penitentiary term followed by a period of long-term supervision. The Parole Board determined that this supervision would begin with the appellant residing at a community correctional centre. Upon completing his penitentiary term, the appellant arrived to the designated correctional centre to commence the period of long-term supervision but soon left. He was apprehended and charged with failure to comply with the conditions of his long-term supervision. He argued that the residency requirement was unlawful. The trial judge agreed, finding that his being forced to reside in penal institution after completion of his prison term violated his s. 7 Charter rights. The Court of Appeal allowed the appeal, ruling that the trial judge erred in permitting the appellant to collaterally attack the residency requirement.

The Asper Centre factum argues, with regard to the proper application of the collateral attack doctrine, that the Maybrun framework should consider constitutional and access to justice issues. Our factum can be found here.

Less than a week later, on March 21, 2018, the Asper Centre will be intervening in Frank, a case focused on the voting rights of Canadians residing outside of Canada. In Frank, the applicants are Canadian citizens residing in the United States for employment reasons, who intend to return to Canada if circumstances permit. Both applicants were refused voting ballots for the 2011 Canadian General Election since they had been resident outside Canada for five years or more. The applicants sought a declaration that certain provisions of the Canada Elections Act violated their Charter-protected right to vote. A judge of the Ontario Superior Court of Justice declared the impugned provisions of the Act unconstitutional by reason of violating the applicants’ right to vote under s. 3 of the Charter, and the violation was not justifiable under s. 1.

The Asper Centre factum addresses the “social contract” argument that has been used to support revoking a Canadian citizen’s right to vote if they do not live in Canada. Our factum can be found here.