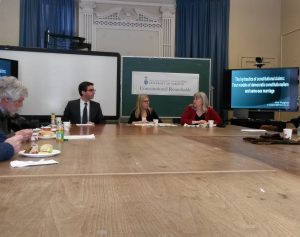 On January 31, 2018, the Asper Centre Constitutional Roundtable Series hosted Athanasios (Akis) Psygkas, Lecturer in Law at University of Bristol and Visiting Scholar at the University of Toronto. His presentation was titled: “The hydraulics of constitutional claims: Four models of democratic constitutionalism and same-sex marriage.” Professor Brenda Cossman, Director of the Bonham Centre for Sexual Diversity Studies, joined as discussant.

There are many actors involved in constitutional interpretation. Psygkas identified a bottom-up process of constitutional evolution wherein multiple actors raise claims with constitutional implications. To articulate this “hydraulics” process, he conducted a case study of the legal recognition of same-sex marriage in four countries: the US, Spain, the UK, and Ireland.

In Obergefell v Hodges, the US Supreme Court held that the Fourteenth Amendment of the US Constitution requires state to issue marriage licenses to same-sex couples. The decision focused on liberty. Justice Kennedy, writing for the majority, provided a list of social actors (“central institutions in American life”) that contributed to the evolving debate of constitutional interpretation regarding same-sex marriage and argued that this debate had now reached a stage of deliberative maturity that permitted the Court to channel this into constitutional law.

In Spain, same-sex marriage was recognized through the legislature, beginning first at the regional level before being formalized in national legislation. In further contrast to the US, the petitions that were put forth in support of legalizing same-sex marriage focused on equality, not liberty. When challenged, the Spanish Constitutional Court stated that it cannot remain “aloof from social reality” and cited statistics concerning Spanish attitudes toward same-sex marriage in making its decision to recognize same-sex marriage.

In the UK, the process to recognize same-sex marriage was largely legislative and proceeded in stages. First, homosexual activity was decriminalized for persons over 21 years of age in 1967. But this provoked some backlash: legislation prohibiting promotion of homosexuality remained in place until 2003. Civil partnerships were created in 2004, which permitted homosexual couples legal recognition. Formal recognition of same-sex marriage came into effect in 2014. Throughout these stages, there was no electoral manifesto concerning same-sex marriage; rather, the process occurred organically through public consultations and hearings at the committee stage of the legislative process. The debate continues in Northern Ireland, where a married, English same-sex couple is challenging the state’s refusal to recognize their marriage.

The Republic of Ireland has direct citizen involvement in constitutional change through referendums, especially when change concerns fundamental laws, like constitutional amendments. The consensus in Ireland, however, had long been against recognizing same-sex marriage. This social attitude had influenced how politicians and the judiciary interpreted relevant legislation and articles of the Irish Constitution, especially Article 41, which concerns family. In 2013, a referendum on same-sex marriage was conducted and by a 62% approval vote brought the 34th Amendment of the Irish Constitution into existence, granting same-sex marriage legal recognition.

Each of these four examples demonstrate the varied systems and means through which social actors influence constitutional interpretation and change. The predominate direction of influence was bottom-up.

Professor Cossman argued that in Canada same-sex marriage recognition was a predominantly court-centric process, with Charter dialogue dominating the arguments. Parliament responded to Supreme Court of Canada (SCC) rulings by changing legislation. This process began with the SCC ruling that the common law definition of marriage as between one man and one woman violated section 15 of the Charter (Halpern v Canada). The Same-Sex Marriage Reference soon followed in 2004. This appears to be an exception to the hydraulics process that Psygkas observed in the four countries discussed. Although there were many activist groups active at this time, the Canadian experience of recognizing same-same marriage appears to have been more of a top-down process and did not exemplify the same hydraulics process Psygkas observed elsewhere. The SCC interpreted the Charter and Parliament followed. Invariably, some bottom-up processes were at play in the Canadian same-sex marriage debate: our Charter is young and reflects Canadian values, and our judges are, after all, from the citizenry.

Psygkas argued that the driving force in this “hydraulics” process is a bottom-up demand for a specific constitutional position within complex institutional structures; the exact form it takes varies depending on the constitution and the institutions present. What implications does this have for when we observe social backlashes or rising sentiments that we perceive to be moving our society in the wrong direction? Current political preoccupations with the so-called “populist” wave are perhaps an instance of this process.