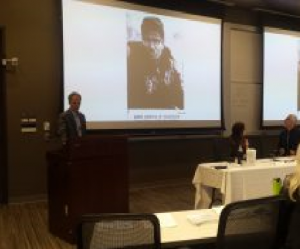 Professor Schneiderman in his presentation titled “Unwritten Constitutional Principles in Canada: Genuine or Strategic?” contended that the SCC acts strategically when invoking unwritten constitutional principles in its decisions. He elaborated the SCC does not intend for unwritten constitutional principles to guide jurisprudence in constitutional law; rather, the SCC appeals to these principles in order to “get out of a jam” and “escape from its legitimacy problem.” In Reference Re: Secession of Quebec, the SCC applied the principles of federalism, democracy, constitutionalism and the rule of law, and protection of minorities in order to disavow unilateral secession and found a constitutional duty to negotiate when a province wishes to secede from Canada. Yet, in BC v. Imperial Tobacco Canada Ltd., the SCC rejected appeals to the rule of law; and in Quebec v. Canada, the SCC similarly rejected the idea of cooperative federalism. This behaviour suggests that the SCC is acting rationally to secure their desired objectives.

The audience was interested in the nuances of the panelists’ arguments. They questioned if public imagination influenced the Bill of Rights – or if only the Bill shaped public opinion, other ways that sovereignty might manifest for Indigenous Peoples, and whether unwritten unconstitutional principles have strength due to their actual content or the fact that these principles are unwritten. Other questions linked ideas from the different papers together. Such questions included: Is the Honour of the Crown an unwritten constitutional principle that guides s. 35 jurisprudence?

Catherine Ma is a 2L JD Candidate at the Faculty of Law and is also a co-leader of the Asper Centre’s Indigenous Rights student working group.