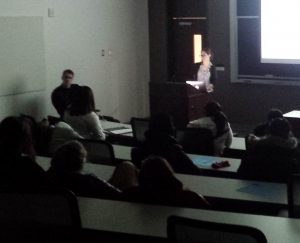 On February 9, 2018, the University of Toronto Faculty of Law was host to hundreds of high school students who were attending the annual Global Citizenship Conference organized by Law in Action Within Schools (LAWS).  Members of the Asper Centre’s Immigration and Refugee Law student working group were pleased to lead one of the workshops for the students at the Conference. Members of the Asper Centre’s other two student working groups (on Indigenous Rights and Police Oversight) as well as students from the International Human Rights Program at U of T Law, also led workshops at the Conference.

In keeping with the Global Citizenship Conference’s overarching theme, the Immigration and Refugee Law group’s workshop aim was to demonstrate to the student participants how global events have a local impact. We explored this theme through the lens of the Syrian refugee crisis. After a general introduction to the events that precipitated the refugee crisis and the conditions facing refugees, the rest of the presentation turned to the responses to the crisis. To provide a comparative perspective, we described Turkey and Germany’s responses before discussing the Canadian context. Part of the discussion on Canada’s response focused on the Safe Third Country Agreement (STCA) and why it might be necessary to suspend it.  The STCA is a bilateral agreement between the United States and Canada that stipulates that asylum seekers must lodge a refugee claim in the country in which they first arrive and that, subject to some exceptions, Canada can refuse or bar someone from lodging a refugee claim and force their return to the United States.

The STCA discussion was also a means of introducing the students to the work of the Asper Centre and its students. This academic year, the Asper Centre’s Immigration and Refugee Law student working group provided legal research assistance to the public interest litigants (Amnesty International, Canadian Council of Churches and the Canadian Council of Refugees) who have joined an individual litigant challenging the constitutionality of the STCA.  This challenge is argued on the basis that the United States should not be deemed a safe country for refugees given that the rights of refugees in the United States under the Trump administration have seriously plummeted and hence the STCA should be suspended at this time.

During the workshop, the participating students actively engaged in the discussions and exhibited an impressive understanding of the issues facing refugees both globally and locally. While some students were skeptical of Turkey’s and Germany’s true motives in accepting a large number of refugees, most agreed that Canada should learn from the two countries’ approaches and take in more refugees. In particular, the students saw the analogy between Germany’s now suspended Dublin Regulation (which regulates which country in Europe must examine a refugee claimant’s application at first instance) and Canada’s STCA with the U.S.  Many of the students felt that the Canadian government’s refusal to suspend the STCA is inconsistent with the accepting and welcoming public image held up by the government.

Crystal Li and Juela Xhaferraj are both 1L JD Candidates at the Faculty of Law and are members of the Asper Centre’s Immigration and Refugee Law student working group this year.