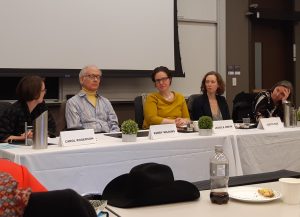 by Hannah Goddard-Rebstein and Arjun Gandhi

On Thursday, March 21st, the Asper Centre held a panel on Indigenous rights and family law, using the case of Beaver v Hill as a focal point for the discussion. The panel was convened by the Asper Centre’s Indigenous Rights student working group.  Professor Carol Rogerson moderated the discussion, and Joanna Radbord (Martha McCarthy & Co., and counsel to Ms Beaver), Jessica Orkin (Goldblatt Partners), Judith Rae (Olthuis Kleer Townshend) and Professor Kerry Wilkins participated as panellists. It is important to make it clear from the outset that no panellists were Haudenousaunee, meaning that discussion of Haudenosaunee law comes from their experiences working as lawyers and second hand knowledge.

Brittany Beaver and Ken Hill are Haudenosaunee parents to a nine-year-old son who have been litigating over the child support Mr. Hill must pay for several years. Mr. Hill, a very wealthy businessman, claims he has a constitutional right to have their family law dispute decided according to Haudenosaunee laws. His application was dismissed at trial, but in October 2018, the Ontario Court of Appeal granted him leave to pursue his constitutional claim.

Ms. Radbord began the discussion by bringing in the perspective of Ms. Beaver, whose personal experience is important to consider first and foremost. Ms. Radbord argued that the Ontario Court of Appeal (ONCA) decision effected an erasure of the lived reality of Indigenous women and children. She thought that focus on the best interests of the child involved had been lost, pointing out that the parties negotiated for two years under Ontario law before this claim was brought up, and it has the effect of making all orders Ms. Beaver receives interim as the constitutional case moves slowly through the court system. In addition, the court disregarded the collective interests of Six Nations people by allowing an unauthorized individual seeking to avoid child support guidelines, when this is a vital constitutional issue that demands that all governments be at the table, engaged in negotiation.

The panellists agreed that the facts of this case were not an ideal way to pursue an Aboriginal rights claim. Ms. Rae emphasized that something coming forward as a surprise at an individual level with no government or authority taking part is nobody’s ideal strategy, but it is something which can’t necessarily be prevented from happening. Ms. Orkin mentioned that Hill’s lack of involvement in the traditional community he is invoking matters strategically (both from the perspective of whether a court will view it positively and as an evidentiary concern). In addition, she pointed out that to suggest that his goals are to forward recognition of Indigenous rights is belied by what we can see on the record. Prof. Wilkins brought up that judges have taken a very jaundiced view of Mr. Hill’s presentation and are likely to be concerned that acknowledging the relevance of Haudenosaunee law here is giving him a get out of jail free card, meaning that this case has a chance of poisoning the ground in terms of recognition and enforcement of Indigenous law.

However, panellists also pointed out that Mr. Hill’s level of involvement in his community does not determine his claim. Ms. Orkin argued that the question which matters, if there is law that a court would recognize, is whether he is subject to that law, not whether he is active in his community; and that this is a question for the Six Nations community. Ms. Rae added that this is not about ethnic or cultural First Nations identity, it is a matter of political citizenship. How First Nations citizenship works is currently highly contested, and may start to mean more and come with more power and obligation going forwards. In addition, Ms. Rae pointed out that his status as an individual without collective backing does not mean he cannot raise an Aboriginal rights argument: as a fundamental principle, individuals who have rights should be able to raise them in certain circumstances.

Ms Rae argued that our current legal framework for determining Aboriginal rights generally, and especially in the context of self-governance issues is atrocious, as shown by the unreasonable requirements of the Van der Peet test. She pointed out that one contributing factor to this problem has been cases coming up through individuals. For example the Van der Peet test was first applied to harvesting rights, and then imported to self governance through Pamajewon, which dealt with bingo games on reserve. That case had the effect of closing the door firmly on self-governance issues through the courts, due to the bad facts and difficulty of providing evidence about regulating specifically “gambling” from pre-contact times. The risk with Beaver v Hill is that a negative outcome would similarly hold back other claims.

Several panellists also pointed out that Mr. Hill faces an evidentiary barrier in making his case. Ms. Orkin expressed doubts that the case would have the evidence needed, given that when she worked with the Haudenosaunee Confederacy, chiefs did not go to court, and took a position on the jurisdiction of Canadian law that is not cognizable to the courts. Prof. Wilkins added that the Haudenosaunee understand themselves to be sovereign, and take the position that Canadian law has no application to them. Ms. Rae pointed out that as the relevant parties have not come to court, we do not know what Haudenosaunee law is.

Overall, the panellists agreed that the facts of this case were troubling, both in respect of the situation in which it places Ms. Beaver and its broader legal implications. While lack of involvement in his community or standing as an individual are not fatal to Mr. Hill’s case, the evidence needed to make out the claim does not seem to be present. However, the positive takeaway emphasized by Prof. Wilkins was that the ONCA decision leaves the door open to a properly framed claim to self-governance rights.

Hannah Goddard-Rebstein and Arjun Gandhi are both 1L JD Candidates at the Faculty of Law and are members of the Asper Centre’s Indigenous Rights student working group this academic year.