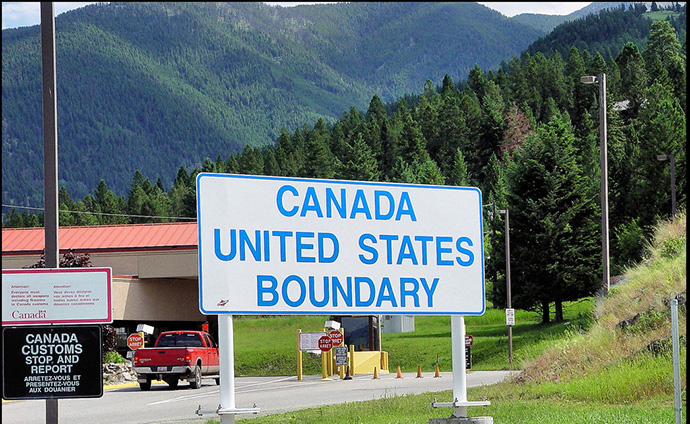 By Karen Chen and Mackenzie Claggett

Canada presents itself to the world as a place where “those fleeing persecution, terror and war” are welcome. It is a reputation that Prime Minister Justin Trudeau touted on Twitter following the decision in the U.S. to institute a travel ban against several Muslim-majority countries and refugees. It is a reputation the Supreme Court affirmed when it released its Singhdecision 34 years ago on this day, April 4, finding that the constitutional right to life, liberty and security of a person extends to those seeking refuge in this country. It is a reputation we must uphold.

As law students engaged in refugee advocacy at the University of Toronto’s Asper Centre for Constitutional Rights, on this Refugee Rights Day, we call on the government to suspend or terminate the Safe Third Country Agreement (STCA).

Under the agreement, asylum seekers who attempt to enter Canada from the United States at border ports of entry are turned away and forced to seek protection under the American system.

This means that while Canada’s internal laws and policies may reflect our commitment to refugee rights, we are complicit with America’s asylum system under the Trump administration.

This will be especially true if the government decides to expand the agreement to cover all asylum-seekers to Canada, who were previously in the U.S. It was reported this week that Canada and the US have moved towards doing so.

By continuing the STCA, the Canadian government forces asylum seekers to choose ever more dangerous and clandestine routes of entry.

On Refugee Rights Day, let us remember the choices Canada has made as a country that respects the rights of those fleeing violence. After 157,000 displaced persons immigrated to Canada following the Second World War, Canada signed the 1951 Refugee Convention to recognize its willingness to take in refugees. In the 1980s, Canada developed a world-renowned private-sponsorship program to assist thousands of Vietnamese, Cambodian, and Laotian refugees find secure settlement. Over the past decade, Canadians have aided more than 40,000 Syrian refugees with this program. This past December, the Canadian government signed the United Nations Global Compact for Safe, Orderly, and Regular Migration. The compact provides a non-binding framework for governments to develop human-rights based migration policies, including objectives to reducing vulnerabilities in migration, strengthening certainty in migration procedures, and empowering migrants to achieve social cohesion.

Being part of the STCA means American refugee policy becomes Canadian policy. When the STCA came into effect in 2004, the underlying rationale was that both countries offer “generous systems of refugee protection” and therefore are safe for asylum seekers.

Much has changed since then.

Since the start of the Trump Administration, there is ample evidence to suggest that “safe” is a mischaracterization of the American asylum system. The family separation policy is one example of this. In November 2018, the Trump administration attempted to deny refugee protection to all claimants who did not enter the United States through a formal port of entry. This rule contradicts Article 31 of the Refugee Convention which imposes an obligation that countries not punish asylum seekers for the manner in which they enter the country. While two Guatemalan children died in immigration custody, the Trump administration announced in December 2018 it would force asylum seekers at the southern American border to remain in Mexico until their court hearing. The result has been a humanitarian crisis that puts the health and safety of asylum seekers at risk due to the lack of support services available to provide housing, medical care, and other necessities. By February 2019, President Trump used this government-manufactured crisis as the basis for declaring a “national emergency” to secure additional funds and build a barrier on the southern border.

Although we recognize the benefit of international cooperation when it comes to processing asylum seekers, such benefit no longer exists if our cooperation is with a country that does not adhere to international refugee law or the ideals Canada espouses with respect to refugee rights. The Canadian government must recognize the harm the STCA is currently imposing on asylum seekers and act accordingly.

Karen Chen is a second-year student at the Faculty of Law where she leads the Asper Centre’s Refugee and Immigration Law student working group. She is also a member of the Canadian Association of Refugee Lawyers.

Mackenzie Claggett is a first-year student at the Faculty of Law and is a member of the Asper Centre’s Refugee and Immigration Law student working group.