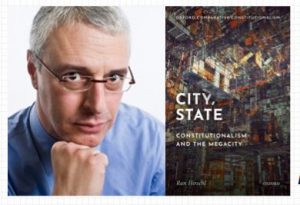 “Urban agglomeration is amongst the most burning policy challenges of the twenty-first century”, says Ran Hirschl, professor of political science and law and fellow of the Royal Society of Canada. “The continued silence of constitutional thought and constitutional scholarship on the issue of cities, urbanization, is just striking.”

On Thursday, November 12th, 2020 Hirschl addressed the constitutional concerns of urbanization and cities’ relative lack of legislative authority during a Constitutional Roundtable discussion about his new book, “City, State: Constitutionalism and the Megacity”, hosted virtually by the Asper Centre. Hirschl says that the impetus for the book came from the 2019 Ontario Court of Appeal decision of Toronto (City) v Ontario Attorney General, which upheld the constitutionality of the Better Local Government Act. Passed in 2018 by the Ontario government, the Act had the effect of cutting the number of municipal wards in Toronto from 47 to 25, ahead of the municipal election that year.

Hirschl began his address by outlining the rapid acceleration of urban growth the world has faced in the last century. In Canada, Hirschl says, 55 per cent of the population lives in six metropolitan areas, and the Toronto metropolitan area itself is home to 20 per cent of Canada’s population. However, these statistics are not uniquely Canadian in nature, and urban population as compared to rural population globally is on the rise. “UN projections suggest that by the end of the 21st century, we will have cities such as Lagos, Kinshasa, Dar es Salaam, Mumbai and Karachi with populations between 70 and 85 […] million people,” Hirschl says. Rapid urban growth raises the issue of extreme density, which in turn may present a major challenge to the realization of social and economic rights of individuals.

In Canada, provinces are viewed as creatures of the province, and recent jurisprudence such as Toronto (City) affirms that provinces have the power to govern municipalities regardless of their relative size or population. This is affirmed in the Constitution Act of 1982, where the division of powers, s.92.8, places “ Municipal Institutions in the Province” within the purview of provincial legislation. In the U.S, cities lack any constitutional personality and are likewise governed by the state, according to a paper written by Hirschl, titled “Cities in National Constitutions: Northern Stagnation, Southern Innovation”. Issues such as gerrymandering, the power of the state to pre-empt city legislation, and the systemic sell-out of urban assets by states are representative of the relative constitutional weakness of cities in the U.S. Similar controls can be found in Australia, where states govern policy areas from education to infrastructure in cities, Hirschl says.

However, a number of countries in the global south have attempted to strengthen the constitutional protection of cities, Hirschl says. India, as an example outlined in Hirschl’s paper, adopted two constitutional amendments in 1993. The 73rd Amendment addresses the governance of rural settlement and townships, while the 74th Amendment addresses that of cities. Although the latter amendment allows for 18 policy areas of which the state government may devolve power to the municipality, Hirschl writes that in practice impacts of these changes are varied and the successful implementation of city power is often impacted by political factors. In Brazil, a new federal constitution was adopted in 1988. Included within was Article 182, which provides that “urban development policy, carried out by the municipal public authority, according to the general guidelines fixed by law, is intended to order the full development of the social functions of cities and to guarantee the well-being of their inhabitants”; Article 183 granted protections to long-term dwellers from forced evacuations by land developers. This constitutional right to the city, according to Hirschl, was “complemented by the adoption of the City Statute in 2001 as well as the establishment of the Ministry of Cities and the National Cities Council in 2003.” The Ministry was, nevertheless, absolved in 2019 and the City Statue likewise was repealed, Hirschl says. Likely, the most successful attempt to protect city rights, Hirschl says, is the result of efforts in South Africa, the government of which has included an entire chapter within their constitution (1996) pertaining to city rights. Granting city control over land use, planning, and social housing, etc, “framers wanted to explicitly reverse apartheid related urban policy,” Hirschl says.

Although attempts to constitutionalize city power have been met with varied success, Hirschl maintains the importance of large municipalities in addressing various issues, including climate change, housing, or economic inequality.  “It is impossible to address either rising economic inequality […] or climate change, without direct involvement of city government, and so the constitutional empowerment of cities may be thought of as an effective means of addressing the problem in a more bottom up fashion,” Hirschl argues. “Likewise the more constitutional power cities hold, the more they are likely to invest in social housing.”

Urbanization is one of the most important issues facing us today, Hirschl says, and “new thinking […] about constitutionalism and urbanization is the call of the hour.”

A recording of Professor Hirschl’s Constitutional Roundtable can be viewed here.

Julia Nowicki is a 2L JD student at the Faculty of Law and the Asper Centre’s current work-study student.