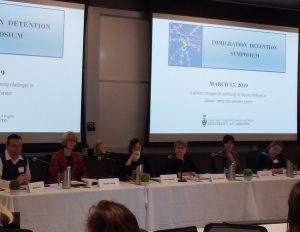 by Olivia Martin and Adrian Ling

The first session of the Asper Center’s Immigration Detention Symposium, held on March 15, 2019 at the University of Toronto Faculty of Law, featured a panel discussing the 2018 Immigration and Refugee Board’s (IRB) External Audit report on Immigration Detention. Kathy Laird, a Toronto lawyer and author of the report, audited 312 immigration detention hearings for 20 different files selected on a random basis. She opened the panel by explaining that her task in completing the audit was to review the fairness of the process in order to ensure that the results of these detention hearings matched the evidence that was produced.

Laird candidly shared she was “shocked” by what she found when listening to the hearings and elaborated that some key themes were inconsistent and inaccurate factual findings and changing adjudicators within a single file. She shared one particularly impactful example of an individual who, in a single hearing, had his release plan turned down because it did not include drug counselling; it was in an urban setting, and it was too close to family where the last issue had occurred. However, in a subsequent hearing with a different adjudicator, a second release plan for the same individual was also turned down because it included unnecessary drug counselling, it was in a rural setting, and it was too far from family.

Aviva Basman and Nancy Weisman presented after Laird. Both were from the Immigration Division of the IRB, where Basman is Assistant Deputy Chairperson and Weisman is Senior Counsel.  As it turns out, the IRB began formulating a new set of detention policy guidelines in response to the problems found in Laird’s Audit. Additionally, between the time of the report and now, the Board had already begun implementing procedures in an effort to improve the system. Basman described a number of these changes, while Weisman spent the majority of her time outlining some of the new policies that were to be implemented in the guidelines.

Some of the changes Basman described related to the continuity of expertise in a detainee’s file. These included ensuring the same member of the Board (who would roughly fill the role of a judge in these decisions) would preside over each of a detainee’s hearings and making sure that the detainees’ bondspeople were being interviewed by members directly. It was surprising to us that this was not already the case, as it seems like the most intuitive way for these hearings to occur. Additionally, Basman was happy to announce that the new cohort of Board members recently hired all had experience in immigration and refugee law or detention work.

Weisman announced that the IRB’s detention guidelines would be published by the following Monday and highlighted some of its most significant shifts. The new policy de-emphasizes some of the categorical approaches that had been used before. For example, a lack of family ties to Canada is no longer dispositive of a person being a flight risk. Additionally, the new guidelines mandate a Stinchcombe-like breadth of ministerial disclosure and an active consideration of all possible alternatives to detention.

Sarah Boyd, an associate at Jackman and Associates who works directly with detainees, spent time discussing what a procedurally fair detention hearing might look like. Boyd passionately emphasized that a procedurally fair detention hearing would look like any other procedurally fair hearing, featuring two parties coming to the table with the same information and being treated equally by the tribunal. However, from Boyd’s point of view, there are barriers that currently make many detention hearings less than fair for detainees, including the different standards that the detainee’s counsel and the CBSA officers are held to. While the detainee’s counsel is standing at the metal detector removing staples from paperwork as required, the CBSA officer is often in the hearing room chatting about their weekend with the Board member presiding over the hearing.

Despite their criticism, both Gros and Boyd expressed optimism that the IRB’s new detention guidelines would address a number of the concerns they discussed in the panel, with Gros noting that the guidelines are “crucial first steps in the right direction, but not the ultimate solution.”

Overall, the group shared a consensus that there is still need for further improvement and that the required change requires a concerted effort from all the stakeholders involved.

View a recording of the panel here.

Access the RESOURCES from the Immigration Detention Symposium here.

Olivia Martin and Adrian Ling are 1L JD Candidates at the Faculty of Law and members of the Asper Centre Immigration and Refugee Law student working group.