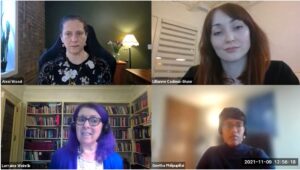 On Tuesday November 9, 2021 the Asper Centre hosted a constitutional roundtable panel on the Supreme Court’s recent decision in City of Toronto et al v Ontario, 2021 SCC 34. The Asper Centre intervened in the appeal at both the Ontario Court of Appeal (OCA) and the Supreme Court of Canada (SCC). The panelists for the constitutional roundtable included lawyers and academics who had participated in the appeal: Geetha Philipupillai, lawyer at Goldblatt Partners LLP and counsel for the intervener Canadian Civil Liberties Association in the SCC appeal; Professor Lorraine Weinrib, Professor Emerita at the University of Toronto Faculty of Law and a specialist in constitutional law and litigation; and Alexi Wood, of St. Lawrence Barristers LLP, counsel for the Asper Centre in its intervention at the OCA and the SCC. The panel was moderated by Lillianne Cadieux-Shaw, of St. Lawrence Barristers LLP, co-counsel for the Asper Centre in its intervention at the SCC.

Lillianne Cadieux-Shaw began the discussion with a summary of the facts and issues in the case. In short, the Supreme Court considered whether the Better Local Government Act, SO 2018, c 11 (the Act) – enacted by Ontario’s provincial government during the City of Toronto’s municipal election – which cut the number of city wards violated freedom of expression. The Court also discussed the role of unwritten constitutional principles in constitutional interpretation. In a 5-4 split decision, the SCC held that the Act did not violate candidates’ freedom of expression. A fuller discussion of the case be found on the Asper Centre’s blog here.

The panelists discussed the many important ramifications of the case for constitutional interpretation and litigation. Professor Weinrib noted that the case may revolutionize the freedom of expression guarantee because the Court de-emphasized the purposive approach to Charter interpretation. Instead, the Court underscored the Baier framework and its more technical positive/negative rights analysis. Alexi Wood noted that it would likely be more difficult to prove a breach of s2.(b) going forward, noting that in the context of preparing for freedom of expression litigation, lawyers will have to carefully frame the claim based on a positive/negative rights distinction. Geetha Philipupillai added the insight that this may lead to more claims based on the Charter’s s.15 guarantee of equality or s.2(d) right to freedom of association given that the current legal test for breach of these provisions does not distinguish between positive and negative claims.

A recurring thread throughout the Roundtable was a comparison between the majority and dissent in the decision. The dissenting opinion, penned by Justice Abella, would have applied the framework for proving a breach of s.2(b) from Irwin Toy v Quebec, [1989] 1 SCR 927 and found that the Act violated freedom of expression. As Professor Weinrib noted, the strong dissent also highlighted the radical change in the majority’s approach to the scope of s.2(b). Professor Weinrib was referring to a broader recent shift in the Courts jurisprudence that narrows the scope of Charter guarantees, based on the SCC’s concern that the existing legal tests are too broad and the test for justifying a breach under s.1 too difficult for governments to meet. During the discussion on the role of evidence in the case, Alexi Wood noted that the Majority’s choice to advance the positive/negative rights framework was facilitated by the majority’s move away from the facts of the case. Conversely, the dissenting opinion was much more fact-specific, partially because the Irwin Toy framework requires an analysis of the facts. In comparing the two sets of reasons throughout the discussion, the Panelists usefully highlighted the extent of the ideological cleavage on the Court as well as the implications of the majority’s departure from the Irwin Toy test.

The Panel also touched on the role unwritten constitutional principles and the place of municipalities in Canada’s constitutional framework. Overall, the discussion between scholars and practitioners, all involved in the case, highlighted some important implications about the case from both an academic and practical perspective. It both put the decision in broader context while helping attendees understand the implications of the case for both freedom of expression specifically and constitutional litigation more broadly going forward.

View the webcast of this Constitutional Roundtable HERE.

Bailey Fox is a Research Assistant with the Asper Centre and is currently an LLM student at the University of Toronto, Faculty of Law.