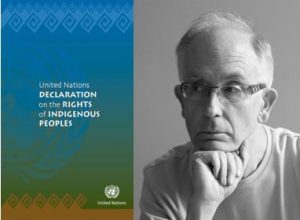 Implementing the United Nations Declaration on the Rights of Indigenous Peoples (UNDRIP) in Canadian law will not be without challenges, and will require both hard-work and great care, said Kerry Wilkins at the Asper Centre’s first Constitutional Roundtable for the 2020/2021 academic year. Held virtually on Wednesday, October 28th, 2020, Wilkins, who is an adjunct professor at the University of Toronto Faculty of Law, presented his upcoming journal article–“So You Want to Implement UNDRIP…”–set to be published in the University of British Columbia Law Review in the near future.

UNDRIP was adopted by the United Nations General Assembly in 2007. The resolution outlines within it “the rights of indigenous peoples” and “establishes a universal framework of minimum standards for the survival, dignity and well-being of the indigenous peoples of the world”, according to the UN website. Although initially voting against its adoption, the Canadian government eventually issued a Statement of Support endorsing the principles in UNDRIP and in 2015, announced its full, unqualified support. However, the international resolution is not legally binding in Canada, and requires domestic implementation for the rights and obligations of the State to be realized. In the prior two throne speeches, the Governor General of Canada promised full implementation of UNDRIP, stating in 2020 that “[t]he Government will move forward to introduce legislation to implement the United Nations Declaration on the Rights of Indigenous Peoples before the end of this year.”

Implementation, as alluded to previously, does not come without its challenges, says Wilkins. “[F]irst, Canadian law isn’t especially well designed to welcome enforceable UNDRIP rights and obligations into it. And second, the colonial experience, mainstream law and governance, has done a great deal already to fragment and to disaggregate ancestral Indigenous communities, destabilize their relationships with traditional territories, and suppress and marginalize key features of their cultures.”

However, Wilkins says that the very “impediments to implementation are among the reasons why implementing the United Nations Declaration in Canadian law is so important”, and putting off implementation will in no way help the process. Sections 27, 38, and 40 of UNDRIP assign the process of implementation to the States, according to Wilkins’ paper. Article 38, for example, provides that “States in consultation and cooperation with indigenous peoples, shall take the appropriate measures, including legislative measures, to achieve the ends of this Declaration.”

In considering how meaningfully to implement UNDRIP, attention must be drawn to two overarching issues, including what Wilkins refers to as the “what” and the “how” of implementation. These questions refer, respectively, to the substantive and procedural issues that may underlie the process.

The instrument leaves undefined certain key features, including who qualifies as Indigenous peoples, how to distinguish traditional lands or territories, and which practices and features can be subject to cultural protection rights. Wilkins suggests that, if left to their own devices, courts and Parliament may revert to applying the metrics with which they are already familiar. Unfortunately, in doing so, or if left to define key concepts within UNDRIP unilaterally, governments and courts run the risk of trivializing the rights that would otherwise be protected. Non-Indigenous governments, for instance, do not have particular experience in thinking about indigeneity. Bands or First Nations as defined by the Indian Act outline criteria that would be “neither necessary nor sufficient to qualify as an Indigenous peoples for the purposes of UNDRIP”, Wilkins says. In reference to rights related to traditional lands or territories, Courts may be tempted to apply the law of Aboriginal Title, reverting to a process that is not only time consuming but likewise reduces the rights contained in UNDRIP to those already protected under the Canadian Constitution. Similar considerations run true for Aboriginal rights.

Various procedural issues must likewise be taken into consideration, namely, by which vehicle implementation should occur. Wilkins provides in his paper two such avenues, including by way of treaty and by legislation. Both have certain benefits and disadvantages, however the Canadian government as mentioned previously, has promised legislation as a means of implementation. Although legislation may provide for uniformity across the country, it can likewise be tailored to apply to specific groups. However, rights contained within legislation implementing UNDRIP, unlike treaties, would not receive constitutional protection. Further, legislation is subject to being overridden, not only by subsequent or more specific legislation, but likewise is subject to potential repeal by subsequent governments which may differ in their constituency and platform. Such potential conflict must be taken into careful consideration when drafting UNDRIP legislation, to ensure that subsequent laws are subject to UNDRIP unless explicitly stated within said legislation, UNDRIP legislation cannot be replaced by subsequent governments unless by certain manner and form requirements such as a supermajority vote, or by including explicit provisions that bind both federal and provincial Crowns.

Julia Nowicki is a 2L JD student at the Faculty of Law and is currently an Asper Centre work-study student.