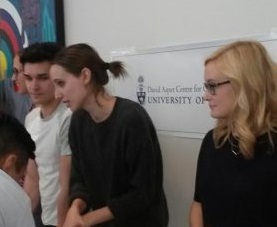 University of Toronto law students can become involved in the Asper Centre’s work through volunteering with one of our student working groups. The working groups are student-led initiatives that bring together 10-15 students to work in conjunction with academics, civil society groups or members of the bar on Charter rights advocacy or current constitutional law issues.

In 2017/2018, the Asper Centre had three dedicated student working groups, who were involved in a number of ongoing research and advocacy projects.

The Police Oversight student working group researched and commenced drafting comprehensive public guides to navigating each province and territory’s police oversight systems, as well as for the RCMP. These guides will include information on the structure, important timelines, helpful strategies, and realistic expectations of success in the various police complaints structures. The initial purpose of this project was to critically evaluate the oversight systems that hold police officers accountable in Canada and make the police complaints structures more accessible to all Canadians. This project expanded upon research undertaken by law student Sarah Strban, while she held an Asper Centre summer fellowship position in 2017.  Sarah initiated the student working group and her co-leaders were Joshua Favel and Natalie Marsh, who were all second year JD Candidates.

During her summer fellowship last year, Sarah assisted Toronto lawyer and former Asper Centre Constitutional Litigator-in-Residence Mary Eberts in conducting research into Indigenous policing.  The research was part of advocacy being conducted by the Legal Strategy Coalition on Violence against Indigenous Women (housed at LEAF, the Women’s Legal Education and Action Fund) in the context of the National Inquiry into Canada’s Missing and Murdered Indigenous Women and Girls.

In recent years, there have been many high-profile clashes between Indigenous peoples and the police. There have been serious allegations of systemic racism and improper conduct, such as against the RCMP in northern British Columbia and the Thunder Bay police force and there have also been countless allegations of police apathy and shoddy work when dealing with Indigenous persons, something that may very well have contributed to Canada’s missing & murdered Indigenous women.

Independent and objective police oversight helps ensure public confidence in the police, which in turn helps the police maintain public safety. For police oversight mechanisms to be effective however, members of the public need to know and understand how to navigate these often-complex procedures.  It is hoped that the police oversight guides being developed by the Asper Centre will promote victims’ access to justice as they will empower individuals and communities to become more aware of their legal rights and responsibilities, as well as allowing victims and complainants to be able to effectively participate in police oversight processes.

The Asper Centre’s Indigenous Rights student working group worked in partnership with the Chiefs of Ontario (COO) to prepare comprehensive research and legal advocacy documents regarding Indigenous peoples’ rights to substantive equality and self-determination in, primarily, the child welfare service provision area.  This project was initiated by JD Candidate Zachary Biech and his co-leaders were JD Candidates Alexis Gianellia and Catherine Ma.  The COO is a political forum and secretariat for collective decision-making, action, and advocacy for the 133 First Nations communities located within the boundaries of the province of Ontario.

Lastly, our Immigration and Refugee Law student working group was initiated by the Asper Centre’s 2017 summer research assistant, Natasha Anzik, who recently completed her second year as a JD Candidate at the Faculty of Law. Natasha’s co-leaders were JD Candidates Nicholas Martin and Christopher Puskas. The main focus of the working group this past year was to provide pro-bono research and support to the team of lawyers who are currently representing the public interest litigants (Canadian Council of Refugees, Amnesty International and the Canadian Council of Churches) in a Constitutional challenge to the Canada-U.S. Safe Third Country Agreement (STCA) at the Federal Court of Canada in which the designation of the U.S. as a safe third country for refugees to seek protection is being contested.

Further information about past student working groups is available here.